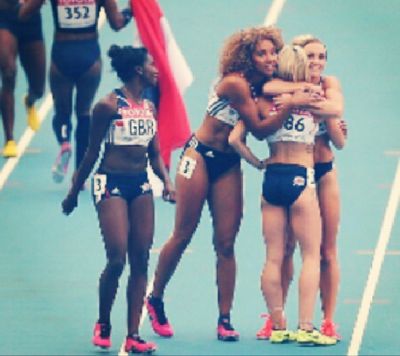 This is the fuzzy telly shot tweeted by an athletics World Champs bronze medallist. Annabelle Lewis carried the baton through the third leg of the women’s 4x100m relay Sunday. She’s on the right of the jubilant quartet.

When interviewed immediately after, they thought they’d been pipped to the podium. It was only after the medal ceremony that stewards discovered an infringement by the French that promoted them. (How the same officials missed the blatant similar offence by the Americans during the final men’s changeover in the race that followed is a shocker).

Yet they were delighted with fourth. A young inexperienced team, they were clearly focused on the process and journey ahead of them. As such, Annabelle (who comes across as surefire leadership dynamite, especially seeing how she paid tribute to their late coach) explained what she put to the team during preparations;

My sport & selling posts are often relevant to general management as much as Sales. Yet this one has much resonance specifically for us as those in an organisation who’s roles are so directly and visibly measurable with potentially such a daunting starting off point. It can be tough to envisage going from zero to hero.

If bearing it in mind can allow Team GB’s sprint relay girls to outperform expectations, it can also surely help us to do likewise.