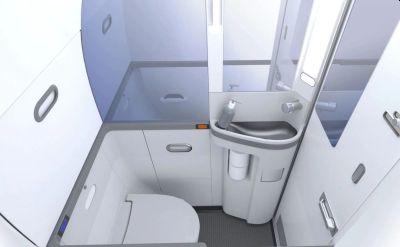 Here’s a current hot metaphor you might well be able to use when part of your solution involves a level of ‘optimisation’.

The airline industry is renowned for striving to shave costs. Which when totted up, stack up to a large amount of cash back into profits.

The no-frills sector nowadays infamous for such PR stunts as saying they’ll charge for toilets, have standing-only rows and that ‘it is not a human right to take luggage on board’.

Those responsible for interiors are also under pressure to join in.

Seating for instance, is getting stronger yet thinner, both saving tonnage and increasing legroom.

And it is from this space I discover the latest airborne wonder.

Rockwell Collins have looked at onboard lavatories, with their newly launched Advanced Spacewall offering.

They’ve managed to reduce their footprint. To such an extent that among other benefits, an extra six seats may now be available inside a 737 cabin. A huge attraction for operators.

A fine achievement. They seem, dare I say it, to have fitted a quart in pint pot.

We, like they, can slice and optimise, but not cut corners.

This example can lead to cracking prospect discussion about what is essential and what is unnecessary.

Also letting you show how you optimise you solution to uniquely fit their unbloated needs.

After all, who wants an over-spec’d delivery with built in waste? 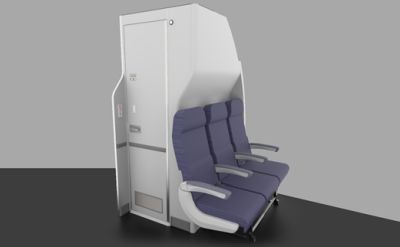