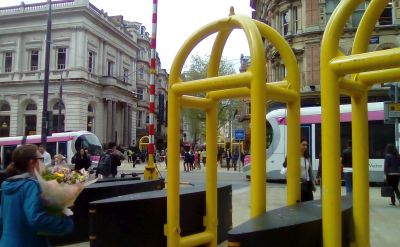 2016 was a chastening year for planners of public events, but most of all, 98 families who suffered the loss of a loved one, mowed down by a terrorist truck.

In the time since, a niche industry has emerged. Obvious, ugly even, barricades, bollards and booms have had design savvy makeovers. In the infrastructure market, what is known as Protective Landscape (or Street) Furniture has developed apace.

I learn with interest about one such newly hewn factory in England’s N East. Where industrial conglomerate Marshalls now employs 2,600 to armour street fittings. Although a fortified bin or bench may now cost four or five times the previous generation, the combination of attractive and functional lifesaving items are finding many understanding buyers.

One such example I see are supersized concrete flowerpots. Not just pleasing on the eye, they are “engineered and deeply embedded to halt a 7½ tonne lorry speeding at 50mph”. Other offerings include toughened lamp posts, sculptures and deep kerbs.

I wondered how I’d not heard of more such success stories. Then you read that each product requires a development spend of £200,000. Which includes crash-test costs of £50,000, mainly for smashing up lorries. As boss Jaz Vikhu surmises, “for competitors, that in itself is a barrier to entry”.

Which introduces the Sales parallel. Within the incumbent supply we treasure, where are our barriers to bid entry?

The number one measure sought tends to be “relationship”. The longer, higher and tighter the better. It helps hugely if these have an unshakeable platform of firm facts, proving the worth of delivery.

These bonds though, are not strengthened through the red herring of the non-workplace hospitality bar, so much as the genuine career advancement, goal achievement and political protection afforded to your prime contact through the results you help drive.

These are our equivalents of huge plant pots or rooted seating. And it helps no end if we can make them as unobtrusive, camouflaged even, as a copse of bollards masquerading as beautiful artwork.

How’s your landscaping look to you from your client or envious and plotting competitor viewpoint?