England can rejoice. Stuart Lancaster gets the top rugby job. He is now our managerial hope to bring world cup glory, back on home turf in 2015.

All along S African Nick Mallett was expected to waltz into Twickenham. Yet the product of the national coaching system grew into the role, was widely regarded by punters and pundits alike as brilliant, and despite the daunting year of fixtures ahead, the clear favourite from all quarters to take charge.

During a gruelling nine hours of interviews, he felt he won through because he showed genuine development. There was both demonstrable progress and having something on offer that the players could “drive their energy” into.

A couple of masterstrokes were considered to be the disciplinary stance he took (serious public misbehaviour saw two of the best players dropped) and shaking up the training (he scrapped the usual warm weather Portugal trip to go instead to a wet and cold Leeds and got the squad involved in local community work).

And would you believe it, he clinched the job with a Powerpoint slide. 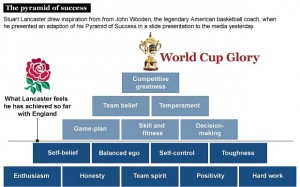 The chap from whom he got this idea was apparently a sport coach from America called Wooden.

Are there (nine or) fourteen steps along the road to your ultimate success? If there are, and you know the sequence, then this strikes me as a good way of showing them.

As soon as I came across this, I put together a quick-and-dirty such treatment as part of a discussion with a particular team I know. Just the six in this quick case, a kind of three-down-three-to-go show, but way better than bullet points, don’t you think? 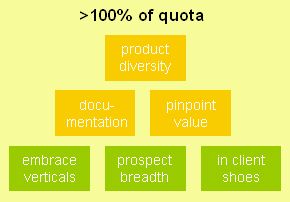