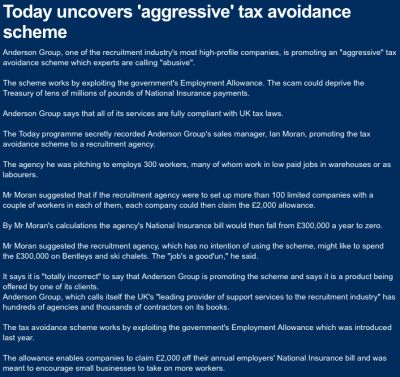 It alleges that what is captured resides not simply in the grey area of morally questionable creative accounting, but traverses the line into outright illegality.

The intricacies of the scheme need not contain us here.

The pitch style used though is a different matter.

Although slightly muffled in parts, here follows transcripts I made.

From the very off, alarm bells should ring.

The intro greetings sound like all too many a meeting start.

In tele-selling, this is known as the “verbal handshake”. It is considered a vital component. A foundation on which crucial rapport gets establish.

Whilst there’s nothing outrageously “wrong” with the taped entrance – it might read professional and polite – it smacks of beginning the typical false chirpy bonhomie for which salespeople are infamous.

How do you begin? What’s your ‘pre-start’ start?

As we move on, the selling company calls itself “the leading provider of support services to the recruitment industry”. I do worry when I hear people describe themselves as an outright number one. It’s a bit me-me-me. Empty vessels and all that. What does “support” mean anyway? If they’d have said something like  “our top thought priority is always…”, “we’re solely dedicated too…” or “we only work on reducing your…” I might have listened differently.

So, they are described as promoting an “aggressive tax avoidance scheme”. “The scam exploits a new government scheme known as the employment allowance”. “Doing the hard sell, [the] group sales manager”. Let’s look at his language;

“It’s by far our fastest growing product, as you could imagine”

“People are taking this up hand over fist, we’ve got agencies giving us a thousand….”

“The [scheme] allows us to open up a whole new world”

“Look, it wasn’t intended to be used exactly like this let’s be straight yeah, but, they set the rules, we’ll build a product”

“It’s like, the government have put in place a scheme, we’ve adapted a product. Tax avoidance? No, it’s just like making a sharp decision, using a government backed scheme. That would always be my argument to them; The Establishment. If you don’t want the rules to be interpreted this way, change it.”

Some syntax is scarily legit, isn’t it? Yet taken together there’s a level of hyperbole that we must maintain a dignified distance from.

There’s supposedly £10m of tax being avoided through this.

“I would say in the colloquial, ‘they are having a laugh’ “

“These things that sound too good to be true, really don’t get into them. But if you are tempted, go and get some advice from someone who’s not profiting from selling it to you”

The sellers respond that all of its services “are fully compliant with UK tax law”.

The piece finishes with the rep “recommending ways to spend all the money that’s been saved”. I’m compelled to admit that in the late 90s, I used something shamefully similar.

“that’s some great ski-ing holidays, couple of nice Bentleys, job’s a good’un, you can get an ipad [list continues] …”