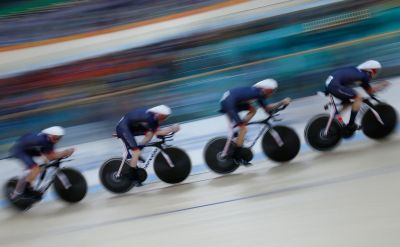 At every turn during the Rio Games, there’s a story of how such forensic component disassembly fuels glory.

I’ve blogged on this over the years, especially referencing its professorial exponent, the quite brilliant Dave Brailsford.

The rest of the world know they’re already beaten inside an olympic velodrome right now. When they moan about it being all about the superior Brit funding, somehow trying to suggest we’re no better than the freedom-denying Russians or Chinese, their pettiness exposes the truth. Money thrown at something never works. It is a resource like any other, and our medal factory optimises it just as relentlessly as any other resource.

So here’s a half-dozen Rio trackside ways you too could make your sales wheels turn faster.

The latest aerodynamic suits – “magic chevrons everywhere” – have all manner of bumps and bobbles that ease the flow of air around the rider. Newly created spray-paint-tight second skins thought to easily deliver their fabled 1% gain. The drive to decrease resistance to forward motion is one we can follow. Even down to knowing about a “trip”. Something that appears an obstacle, yet actually smooths the path of what follows.

Your Own Room X

An early innovation was nicknamed the Secret Squirrel Club. A unit specifically tasked with finding those one-percent improvements. Currently labelled Room X, I think this is probably the biggest single area awaiting mass salesteam adoption. Yes, a few places have Sales Ops. But sadly these are mired in crm adoption or compensating for marketing slack to the exclusion of proper propulsion.

Even the medical staff get involved. Many sports analyse realtime activity to spot when a cliff is about to be dropped over. From racing car tyres to athletic muscle tensing. The Team GB cycling mantra is “prehab not rehab”. And as you’d expect, they’ve taken it to a whole level higher. A movement all about treating causes, not symptons. The most headlining of which from the Rio cycle being the ladies’ ban on, ahem, bikini waxing.

If you’re not improving, you’re not working.  Much has been made of the oppressive cultural leanings that can take hold in pursuit of winning which appears to have left those ejected from the squad very bitter. Is one man’s blunt honest truth another woman’s sexist bullying? Yet the elevation of process above outcome is critical.

Widely adopted across UK sports now, funding allocation switched from a 4 to 8-yr cycle. Nearly every salesforce falls into the trap of being current FY focused alone. Whether driven by bean counters, shareholder ego or the ever-diminishing management tenure, it remains an asphyxiating flaw. Sustainable success cannot come from a revolving year-end fixation.

Touring studios in the aftermath of another big victory, Brailsford revealed he’d a dozen projects on the go, “from handlebars to hydration”. A dozen. Can you name any projects your team has running aimed at lifting the bar? Their ambition never stands still. And nor should ours.