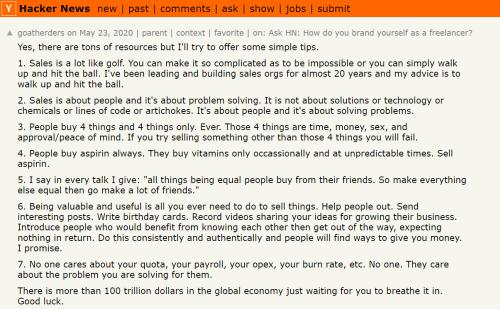 This is gleaned via the Atomic Habits author James Clear newsletter passing on a Sales angle in 2020. From the original source as shown above [image links to y-combinator posting of (Texan ?) Colin Dowling from sales consultants, Raincloud].

In the thread, the writer adds two clarifications. Namely re:

#4; It’s metaphor for ‘people buy solutions to problems they have, much more than they buy preventative care’, &

#6; [to précis] the difference/nuance being these aren’t expected of you, and being unexpected makes them all the more special.

Well. It isn’t that his septet are rubbish. It’s more that it is fairly impossible to boil down selling success to a small list of such bulleted ‘deepisms’. Whether that be over a career, or for the quick-hit of today’s ‘close’. No matter the validity of what each nugget contains.

Still. It is indeed worthy of note that of (at time of my blogging here) almost one hundred and thirty weekly newsletters from a best-selling ‘productivity hack’ style author, he chooses this as his sole Sales highlight thus far.

He cites “over 1,000,000” recipients for his mailing list. (Which has a decent format, too). So anything with some worth is also a welcome broadcast to such an audience.

You could get picky about the detail.

How many people truly admit to having a ‘problem’? (I shudder too at all the cold-calls I’ve heard and role played where once the prospect mentions they suffer, the rep replies, “great!”).

There’s still a huge demand for #4’s semi-dismissal of risk mitigation. The insurance industry, for instance, isn’t exactly teeny, is it?

All things are seldom equal. The enticing mirage of ceteris paribus often a fallacy.

What #7 may not know, is the power of the line, ‘I’ve put you on my forecast, should I have?’ Nor does it venture inside the ‘problem solved’ to consider both professional and personal win.

And totally absent is the fundamental element of any repeatable, sustainable successful sales endeavour; the focus on process.

These are gripes, yes, around the edges which almost any comment piece can fall into a trap of for sure. Someone with decades of experience at the sharp end could note similar like I have here.

Yet that misses the point.

At least it got constructed.

It’s a valid starting point too.

It does get people thinking beyond the self-help, quick-fix, get-rich-now televangelist snake oil which pollutes our profession.

It could be the writer’s selling manifesto.

How he aims to conduct business.

At least he has one.