Following on from his latest book promo tour, renowned financial historian Niall Ferguson recently joked about his 15-year old son rinsing him in the cryptocurrency stakes back in late-2014.

What his article went on to suggest, holds interesting parallels for the levels of enthusiasm we solution sellers see rollercoaster (spiral?) during a bid. Even single meeting. Or quick phone call. Let alone a message string.

Here’s his screenshot of the “five stages to most financial bubbles”; 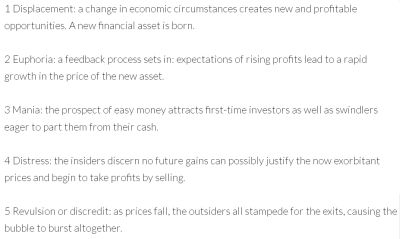 They both share as stage one ‘displacement’. A chance to profit from change appears. Then rocket their own course through excitement until doom.

The key, surely, is to manage your prospect emotion. The inexperienced will keep on going. Perhaps reminiscent of the wonderful bitcoin “investor” hashtag, #hodl. As in ‘i am hodling‘, from an original (whiskey lovin’) forum post title misspellingh. Now given the backronym treatment, so aka Hold On for Dear Life.

Whereas those who’ve got burned too close to the sun before will know when a peak is almost reached.

End proceedings then and there. Do not over-sell. As the entertainer’s code says, ‘always leave ’em wanting more…’

m from his ‘Minsky Moment’; “when a market fails or falls into crisis after an extended period of market speculation or unsustainable growth”, lately inspiring the ‘Road Runner’ metaphors when Wile E. Coyote speeds by, stops mid-air having gone over the cliff, then crashes down to the ground below beep beep

h this misspelt acronym trope is a wonderful sales device when a key prospect enthuses with a key deal phrase, yet puts it in a different order to the one expected (by way of example, I recently had a prospect refer to an unwanted ‘ivory tower’ with a different colour) – imagine if you get a chief exec deliberately saying something like that to you, grab it, treasure it, use it