A kind of whodunnit, based around a wrong-place, wrong-time in denial yet functioning alcoholic. Subject to re-visioning her past and voices in her head of the victim.

It might sound a tough watch, but leave the total implausibility of the plot behind and eight slick, fast-paced episodes fly by.

Despite the dubious sociopathy of the titular character, Big Bang Theory‘s ‘Penny’ delivers a barnstorming portrayal.

One source of comedy is the pair of FBI agents looking into things.

And would you know it, they have a case wall.

This year I’ve noted quite a few of these.

Here’s theirs, behind ‘Agent Kim Hammond’. 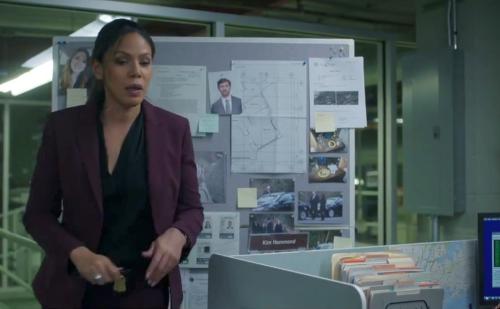 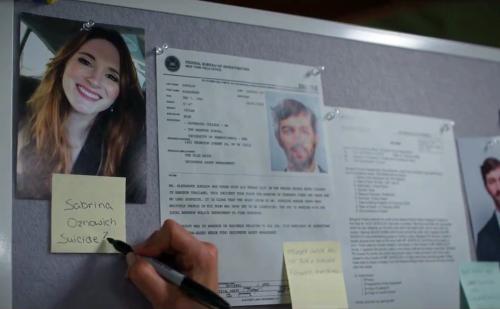 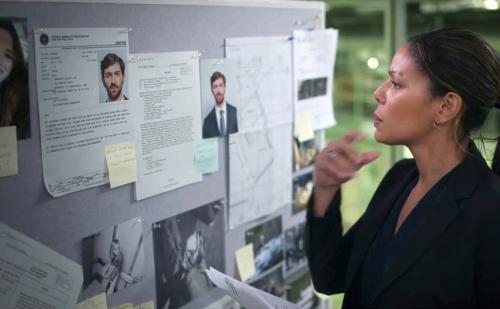 And some more detail.

One point arising for me from this piece of scene dressing, is what stays in the paper files and what gets pinned to the board?

Let’s say that each doc is a copy from one in a binder. Then why not annotate? In big marker or highlighter pen text?

If this was a whiteboard rather than pinboard, then you’d expect to see keywords surround each pic, lines connecting various items and unanswered questions written up in a kind of code or initials relevant to the case.

Even a list of outstanding queries as a checklist, with ticks or dates next to each on their left.

I’ve blogged on the adaptation of such telly case walls for our sales workspace plenty over the years.

This example here reminds me that whatever the number of pieces your process might possess – and it is rarely more than say six or seven – then these patterns of events can be the ‘rows’, and each live bid its own ‘column’.

How you fill each cell can make the difference between hitting quota or not. This year and next.