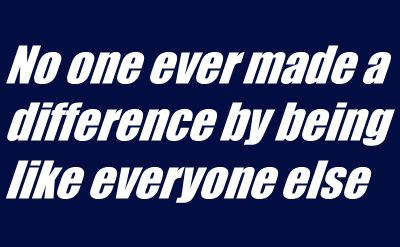 Pundits are puzzled by the success of this Hugh Jackman movie musical and soundtrack.

Despite lukewarm reviews, audiences flock for repeat viewings. The accompanying album could even earn a longer unbroken stint at Number One than the current record holder over the past twenty years, Adele’s 21.

From the title alone you’d suspect a sales tale must be in their somewhere.

Yet I was drawn to one of the oft-quoted lines of Jackman’s character in the film;

“No one ever made a difference by being like everyone else.”

There really isn’t many an occasion when this doesn’t apply as a winning formula.

Especially on the beauty parade that is often a solution buy longlist.

Where you may wish to consider reining such urge in, is by following the sustainable, repeatable process which tends to bring in the bacon.

Those proven steps that pretty much guarantee you’ll prevail.

What you/your colleagues have proved wins your company and product the business, more often than not.

Do you know what this Greatest Showman success looks like for you?

As an aside, I went through a phase of bookmarking supposed worthy quotes. Given the general paucity of crackers and the fact you ought really not deploy them on a sale, it is not an exercise I’d recommend. As you can probably tell from a selection of those I repeat below which I’ve come across over the past few months or so. Culled from sources as staid as inc or Fast Company mags, instagram deepisms that Facebook’s (ir)relevant algorithm coughs up into my home feed, and clown friends of mine sending through whatsapp;

“I think any time you try something crazy, you’re going end up flat on your face just as many times as you end up wildly succeeding” Kathryn Minshew (ceo of The Muse)

“Anytime you step away from the norm, others are tempted to dismiss you” Will Dean (Tough Mudder)

never wrestle with pigs, you get dirty and they enjoy it

footnote for English readers… the design for my quote ‘slide’ pictured up top is taken from the tweeted statement of Dec, from “Ant & Dec”, which pretty much anyone in England will have seen relating to the latest scandal to consume the double-act this week – they use a navy-ish deep blue font, which I feel is “Impact” italicised on a white background, that I’ve flipped for this treatment