Worldwide phenomenon Top Gear has a regular feature in its show where they put “a star in a reasonably priced car”. It’s a highly popular slot and attracts people way above mere zed-list celebrity status. As evidenced by the latest series embryonic leader board. 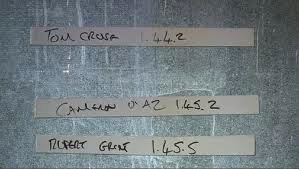 After a few trips around their fabled test track, the stars sweat on the studio sofa to see where they rank. What is fascinating is that nearly every one of the racers comment on where they want to be on the board. Even more interestingly, they reveal where they do not want to be.

Host Jeremy Clarkson hams up the theatre of course. Making sure each victim names other celebs they must beat else their heads will be forever hung in shame, as he hovers around the metal board with his hastily scribbled fridge magnet. He slaps the time on. Cue hoots, chuckles or even gasps.

So why not borrow from such global megabucks box office for your next presentation?

Is there are measure on which you can judge participants, relative to impact or uptake of your product? Can you take an indicator that applies to those with and without your product and fit your prospect within?

On what ranking do you think your prospect considers they’re high on, yet in truth are lagging? If one isn’t publicly available, then can you create one through a few chats with stakeholders on their success?

For instance, I once used annual sales training days throughout an industry in a presentation to sell sales BI software. I got estimates of both my prospect’s competition and allied sellers investment along these lines and put up a list of familiar names. Hello humorous hisses and boos. Then the days were revealed.

Where would my prospect feature? I clicked the mouse… very near the bottom, was the answer. The message – catch up and finally invest in your sales efforts. On software with me, naturally.

The power of a simple list and preying on expectations of where you should sit in it.