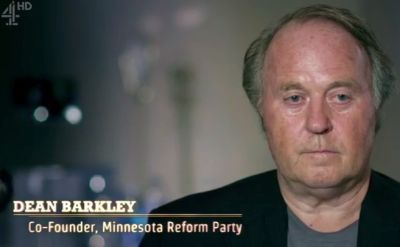 I was thoroughly entertained by three hours of Channel 4 chronological documentary on the extraordinary life story of The Donald.

The final episode centred on his rise in Politics. Its most featured talking heads were former aides Roger Stone, Sam Nunberg and the man pictured above, Dean Barkley.

Fascinating was the store put in his forerunner, former wrestler Jessie ‘The Body’ Ventura. When against all odds he won the Governor race for Minnesota in 1998 as a total outsider.

An incredible portion re-ran his opening speech during a TV debate. He lacerated rivals as corrupt (“this is not an election, it is an auction“) and rendered them visibly beaten under the lights.

It seems My Boy Donny saw this success in part as a blueprint for his Presidential ambitions.

After the shock victory, Trump sought the recipe. Barkley told him flat;

“people do not remember what you say, they remember how you said it”

Which is kind of an adaptation from an old adage. One famed around the web — from author perhaps unconfirmed — “They may forget what you said but they will never forget how you made them feel”.

In Late 90s Minnesota, there appears further layers to this;

“Tell people what you think. Don’t give them pre-prescribed, what you think they wanna hear. Because if they think you’re telling them the truth, they’ll get excited and they’re gonna support you.”

The power of this ought not be lost on the Sales presenter.

I often encounter salespeople – senior ones included – who spend any time taken beforehand (note I do not suggest an amount of time that entails) cramming features, figures and factoids into their slides. At the expense of crafting how their delivery should take shape.

I hope you’re not falling down this trap.