Never let it be said that I’m not up with the zeitgeist.

I learnt a new word this week.

It seems to have been around almost a decade.

And a portmanteau to boot. Always entertaining. Here’s the two-thirds-reliable wiki; 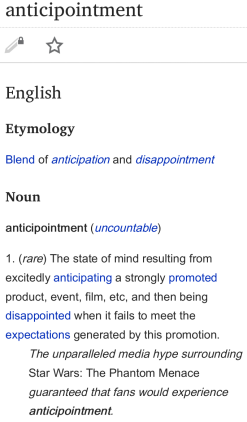 I happened across this in the context of a Westminster by-election. The incumbent was set to lose. Yet the insurgent was said to be in danger of missing out on post-win glory. Primarily because anticipointment would dampen previous boasts of an enormous upcoming victory margin. By rendering any smaller poll share akin to a defeat.

Oh how I instantly thought on Forecasts.

Immutable forecast accuracy is a holy grail of sales ops.

In my experience, salesteams just do not monitor to improve this supposed vital management indicator.

The fault does not lay solely on our shoulders though.

Bean counters, marketeers and whatever represents ‘production’ all meddle and fail to fully understand this crystal ball gaze stipulation.

Reps are universally panned for either perennial over-exuberance, or eternal pessimism.

The latter can exhibit itself in the quota-buster as yet another unsavoury trait; sandbagging.

The classic form of this involves ‘allowing’ a deal to slip into the next sales period. Typically to the advantage of the rep themself, like to increase overall commission or simply to ‘smooth’ sales frequency and so keep the microscope of authority’s attention at bay.

Other, cuter slants exist. Like when you don’t wish your whale to be the extra focus of management. Such as when the knowingly control-freaky super-seller suspects higher-level participation will scupper their chances or slash the price (and so commission too).

The former can lead to serious internal reputational damage. Like a selling Peter crying client Wolf. The drift of colleagues no longer wanting to work on the bids of someone who over-promises and under-delivers deals turns into a chilling stampede.

I remain amazed at the archaic forecast routines of even the slickest salesforces.

Much of this has to do with the concrete that so-called wonder-crm vendors place their selling systems in.

As if assigning percentage likelihoods to pipeline deals according to their chronological journey to create a weighted total can ever magically predict what’ll truly come in this month.

Yet with a touch of collaboration, it could all be so markedly different.

All you need to know is your true process. The one you follow where you’ll win through nine times out of ten.

Not a linear listing of crm gateways. Not a checklist of wikipedia funnel stages. Not a hunch driven by how warmly the prospect greets your calls.

What are the half-dozen outcomes that, when they take place, pretty much signal the deal will be yours?

Spread the concept among all tiers of management.

Put your proven, winning process at the heart of your forecasting for company-wide buy-in to flood in, as well as order after order.