The words from the denouement of the 1992 film A Few Good Men. Jack Nicholson’s colonel admits to the nods and winks and more that led to a soldier’s beating.

I couldn’t help but remember this iconic movie moment phrase when watching the most uncomfortable tale of unrepentant corporate greed that was the Dirty Money S02E01 exposé on American retail bank, Wells Fargo.

This Netflix documentary similarly showed a succession of banking chief execs either fail to acknowledge the abuse of clients that was endemic on their watches, or pay lip-service to them with disregarded proclamations that any fraudulent culture would be rectified.

In short, the policy chosen to rigorously pursue they called cross-selling.

A staple of many a solution-sell operation. Widely prevalent in retail markets too.

These apparently homely bankers were lauded for their push to create ‘deeper relationships’ with clients. Through offering an array of products available across their eighty group companies.

Unfortunately, these products did not help their customers. Nor were they clamouring to buy them.

Account holders were pressured into opening extra accounts. Despite not needing them in the slightest. Let alone the extra charges now due.

For a while the media championed the bank.

Then the first whistleblowers emerged.

Their tales are harrowing.

The kinds of salesteam sessions that were common in the 90s. Where each member was asked to “commit” to a number. Which ended up being a useless exercise in everyone saying they’d open eight new accounts that day.

I myself suffered just such meetings back in the day. Make your “pledge”. What a complete waste of time. All about oppressive cultures, confirming status of ego-maniacs. Never getting anywhere near a sustainable top-performing sales department.

Every time a client would come in with a “problem”, the training diktat was to immediately respond that you had a “solution”. Which was always another new product. On top of what they had already which was causing them trouble.

One brave sales lady spoke out. Her Californian town of St Helena housed 5,000 adults. She duly calculated that the five people in the branch selling eight accounts a day would mean the entire town would have one in just 125 days time. Presumably meaning that every six months each local would have to open yet another new account for numbers to stay on track. Unsustainability writ large.

Of all the trained ‘sells’, the cross-sell is perhaps the most problematic.

Switch-sell means swapping one item for another. Greater profitability the usual aim in return for ‘better’ product durability or service levels.

Link-sell means adding on an associated, complementary product. Both greater till-ring and margin from ‘one backside to kick’ supplier simplicity.

Then the cross-sell tends to mean selling an extra something that is not quite in the same field as items in the existing shopping basket.

I’ve had much experience of post-merger drives to open up one sales division’s client list to another, now newly related by (often unwanted) marriage. It simply does not end well.

The vaunted synergy of the 1970s-steeped conglomerate building M&A crowd fails to materialise.

Indeed, the distraction can cause clientbase chaos. From salespeople being put in the very same invidious position to which the Wells Fargo tellers fell prey.

To try open ever more new accounts, the bosses instigated activity such as a “family and friends day”. Salespeople had to pitch to their nearest and dearest products they increasingly realised were bad for them. Even asking for one for pets in a given example of ridicule.

And that’s before we got to the revelation that fake accounts were being opened en masse.

The malaise infected other parts of the business. With larger misdemeanours emerging. Mortgages, small business, wealth management. No line of business escaped.

The deliberate illegality would eventually see fines. Yet mere pin-money considering the profits and remuneration of those involved.

Cross-selling volume was even a line in their Annual Report.

The snippet showing this page saw efforts posted around 6.25%.

Although who knows how this was calculated.

Then there was the shocking “boiler-room” style micro-management.

Three or four times a day, branch managers would walk round the team to see each person’s number for the day so far.

Which would get reported up to each regional manager one step higher up the chain to pass on above and above again and so on.

There’s a lot to take from this story of Sales gone wrong.

As often is the case, many of the underlying ideas were in fact healthy.

The problem in this instance, appears to be the general bankster disease of thinking they’re kings of the universe; “growth for growth’s sake is the methodology of the cancer cell”, and all that.

Let’s consider beyond the toxic realms of banking. Selling anything that a client does not really need, won’t benefit them, or will not encourage repeat custom from ordering longevity is a big no-no.

Cross-selling can often cross this line.

That’s not to say its trio of allied forms avoid such peril either.

With customer delight, lifetime value and Net Promoter Score focus omnipresent these days you can though ask the question without tarnishing your reputation.

To track your performance on these four ‘sell’ measures can make for a worthy data set (gap analysis an old favourite of mine, for example).

To create options that enable happy customers to increase their dealings with you can be a noble pursuit.

To give salespeople the tools to manage themselves over suffocating micro-management is hardly ever wasted time.

And lastly, to truly know how your customers view your attempts to “wow” them is essential. as evoked by this misplaced animated placard shown from an internal Wells Fargo training video: 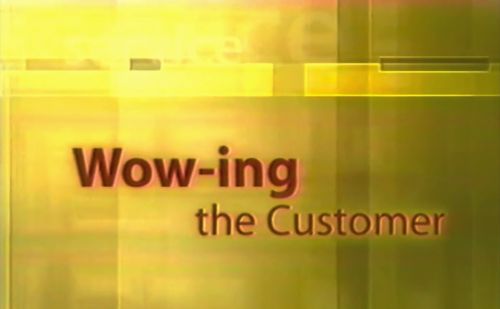