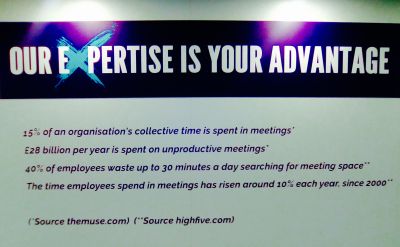 Here’s some stats as plastered on the side of a conference wall. Talking about “collaboration” across multiple workplaces.

The salesperson in situ informed me that 20% of workers spend 30% of their time working from home.

I was reminded of another of these many figures, which suggested the happiest employees only spend one day a week with ‘the team’ in their designated office.

They all seem made-up numbers, yet ones with more than a grain of truth to them.

Such as from this NYTimes reporting of a February 2017 Gallup poll into American remote working trends. Which show a trio of interesting graphs; 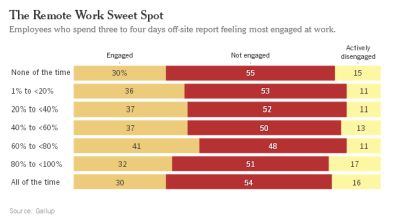 In 2016, “43% of employed Americans said they spent at least some time working remotely, according to the survey of more than 15,000 adults”.

Whilst these numbers are bandied about to promote tech that lets those in different locations work together, they also have significant impact on that most vexing of funnel activities; getting an appointment in the first place.

If the general out-of-office status is that two in five will be away when you call – and that proportion is matched by your target role sector – then what do you do to get a foot in the door?

I’ve heard salespeople suggest that social media contacts should be included in their cold-call metrics. I’m not a huge fan of that. It’s a bit like including streaming data in music charts over actual download sales. While there is merit in embracing the new way of doing things, it is not necessarily a true measure of consumption. (Take this week’s news that Shape Of You became only the third ever track to be awarded 3m in UK sales, through getting “streamed 224 million times and downloaded nearly 765,000 times”). Similar incongruity goes for LinkedIn requests in our field, I think.

I come back to my old soapbox that seeks to switch the tired cart-before-horse pursuit of “leads” in favour of tracking genuine “conversations”.

This isn’t a new puzzle for us to ponder. For as long as I’ve been around the scourge of permanent voicemail has been in play.

In today’s workflow, as well as pursuing ‘likes’, this means treating gatekeepers differently and booking in telephone or video call slots on the premise of the problem you uniquely resolve as one part of your ‘prospecting mix’. How many elements does yours presently have?