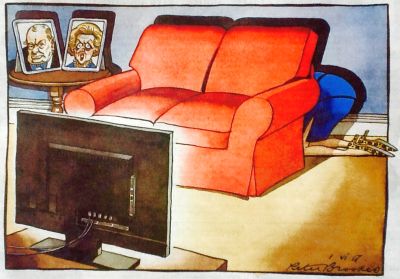 …when it’s an unstoppable slide.

I’ve touched on Wobble Thursday before (both 2015 and 2014). It happens a week before election day in the UK where the ruling Party of the Right sees polls that suggest victory is not the tap-in they presumed.

2017 seems no different. Yet the scale of said wobble in this campaign-like-no-other certainly is.

From 20 points ahead to predictions of a hung parliament.

The one caveat though is huge.

The credibility of pollsters is shot.

They wail that they’ve fixed their ways.

In the absence of official results, they continue to make headlines. Peter after all, did cry wolf correctly eventually, they claim.

Nearly all of them converge on a kind of reboot.

Not one that re-creates the whole campaign, but rather getting back to the single core message that began the whole (misguided?) enterprise.

All talk of a menu without prices, letter to Santa and magic money trees does is play on domestic ground. Brexit Brexit Brexit. Who do you want to bat for Blighty eleven short days after the votes are counted? That, is the key drum the incumbents must bang if they are to (re)win, bark those in the bubble.

Will this work? We’ll know shortly.

In the meantime, how this floats above solution sales is highly relevant.

In my early days chasing down a quota I was informed by an old hand that just before you win a deal that you always fancied, you’ll think you’ve lost it. Echoing a darkest-before-dawn fable.

What do you do in such circumstance?

Such panic in our world can often lead to the totally unnecessary price-slashing discount. Ouch.

It also has the side-effect of talking the kind of minutiae that takes you away from your main strength.

There tends to be a single over-riding reason you are number one desired vendor.

Along the lines of, ‘It’ll work’, guaranteed. Or crucial alignment with prospect processes. Or some other essential risk mitigation.

Return to that. And stop the wobble.