There are no facts, only opinions.

The classic, withering brake of the prospect who either (seldom) wants to vigilantly check a detail, or (often) seeks ways to dismiss your plans.

The phrase comes in different forms.

Add that ‘everything is a perspective, not the truth’. Or swap out ‘opinions’ for ‘interpretations’.

I’m also a long admirer of, ‘the plural of anecdote is data‘, with the remixed ending, ‘ is not fact‘.

Anyway. These thoughts ran through my mind as I saw the results returned by the Google algorithm after checking the UK’s Office for National Statistics published GDP performance for July.

Firstly, I was astonished at the unbelievable bias in the sources Big Tech deigned fit to primarily present to me.

None represent any of the news sources I look to or trust.

A blatant case of ‘election interfering’ style biased promotion of political views to which you neither sign up to nor consider valid to emerge beyond their pit of fake news.

Moving on from this (not easy, I sadly report) I then noted the actual text of each report headline. What I’d naively thought would be a mere factual reporting of a number. Riven with oikophobic and seriously slanted opinion.

The actual top listing, whilst unnecessarily dismissive too, it was also out-of-date. Way to go, google. And from perhaps the world’s most self-entitled, laughing in the face of impartiality media outfit, the BBC.

Of the ten results returned, here’s a sample of my screen chosen to show the two outliers. Leaving four-fifths for what you’d classify as openly ‘anti’ masquerading as neutral. (I can imagine the Guardian sub-editor was subsequently given a rollicking…); 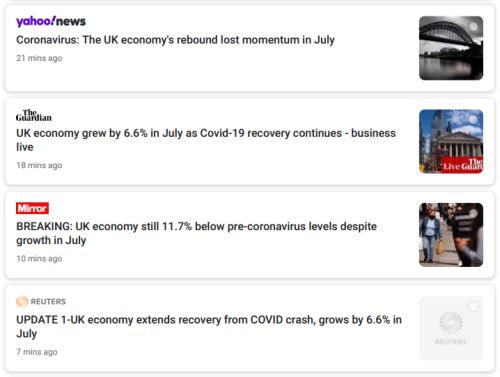 I’d overheard the monthly rise was six or something percent.

As part of whichever ‘shape’ the recovery is taking.

I should have realised this was a number no-one could leave standalone.

It brought to mind a demo I once saw in Boston. Way back in the mid-90s. Where part-way through, the excitable (is there another kind?) American salesman literally screamed at the prospect, “and that’s a true fact!”

Maybe we ought amend the old wisdom to something like, ‘no fact has impact without context’?

And bear in mind the sage words of Professor Steven Pinker. That media falls down the trap of thinking that any story can only ever be valid if it berates those from their political ‘other side’. A cousin of the Right-leaning Scott Adams update of the splash story rule, ‘if it bleeds, it leads’ to, “if it misleads, it leads”.

Random case in point from this apt comment upon such typically non-objective ‘bad news only’ reporting this week. From a day when Sterling was still one cent higher than it was against the Dollar from a fortnight before;

A couple of days of losses: BBC Campaign HQ sounds the alarm.

So you have a number.

How you craft your one-line sentence for it is more crucial than ever.