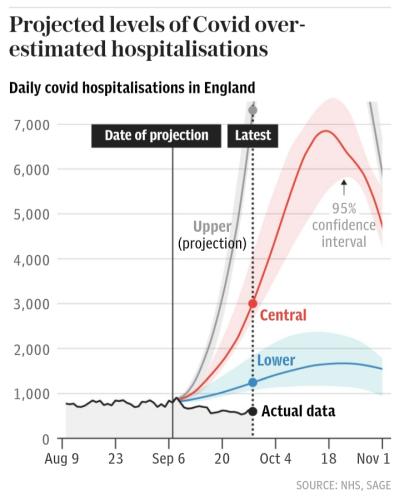 I have blogged many times down the years about the scourge of following forecasts as fact.

It has proven itself a disease which afflicts many a great Proposal with an unnecessarily yet fiendish insurmountable barrier.

One main way of getting around the flawed projections which aim to derail you, is to thoroughly expose the assumptions on which they are based. Invariably biased in both tone and tally.

Which incidentally, is why I always recommend our own future figurings get delivered with almost forensic attention to their shaping assumptions. Best when also coupled with generous application of ranges. The type of visibility that error bars, sensitivity analysis and upper/lower cases provide have an uncanny knack of building trust in you in prospect minds.

Which brings us to yet another everyday set of projections which have been seen to be so wide of the mark they are – whether you be avid lockdown-o-phobe or -phile – risible.

Yes, it’s those barmy boffins of the UK’s Sage committee again. The ones on our airwaves forever preaching the only way ahead is through perennial quarantine. And any lifting of coronavirus restrictions an Armageddon-guaranteeing folly.

It is so frustrating that these people – receiving the intoxicating and malignant combo of full salary regardless with control over levers of power – are not being held to serious account.

Let’s look at the latest failure. Graphed above by London’s Telegraph [sub’n req’d].

The disparity is astonishing.

Especially given that they’ve had eighteen months to learn from (manifold) previous mistakes and refine their modelling.

The accompanying article lists several reasons “Why the Doomsday Covid models were so badly wrong”.

The comparison with forecasts – typically in terms of business case Return on Investment that we present or are spoon-fed our prospect by those preferring a different course – is that there will be variables similar to the ones these scientists so sorely misread.

To highlight and explain is to win.

In the case of the UK there’s their bizarre dismissal of the link becoming broken between “cases” (recorded infections) and hospitalisations. Followed by ignoring the almost zero transmission by the asymptomatic or patrons of hospitality venues and events. The lack of any evidence that schools are superspreader hotbeds. Not forgetting the absence of considering the enormity of the pool (as identified by the government’s own ONS data) of the unknowingly naturally protected. Then also leaving aside the clear reduction in close personal contacts after Freedom Day (from an average of ten pre-pandemic, to just three).

Finally, a failure to factor in that the vaccines – drum roll for those suffering BBC overload – work.

The groupthink here clearly favours rapid catastrophising. Forecasts that persuade understand navigating the nicest of balance between upside and downside. Does yours?

Have a look at your latest set of gleaming numbers backing up your pitch.

The odds are that among them, there are similar opportunities to avoid miscalculation.

Where is your prospect’s equivalent of a freshly stemmed cause, a significant change in human behaviour, knock-on effects to titrate up or down and the removal of a bottleneck?

Each and all of which unleashes all sorts of desired results. Ones that you, uniquely, can now back up, right…