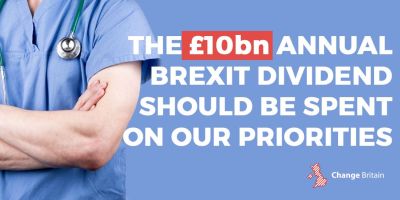 This one notable for the first time I heard the concept Brexit Dividend. From one of the revelling post-Maastricht “bastards”, no less.

A nifty GIYF led me to the image up top.

I was intrigued to see such mental picturing.

I note the vaunted post-Cold War Peace Dividend receives mixed reviews nowadays. Despite much hope, money never got switched to other causes from military budgets, as conflict and threats continued or grew from all angles.

Although honourable mention must go to Northern Ireland.

Whilst it may have stuttered early on, they did indeed and still today reap considerable social and economic fruits after cessation of their Troubles.

It is perhaps partly in this spirit that the phrase crops up again now.

So could such imagery work on a solution sale?

Well, let’s take the latter word first. Everyone likes a dividend, don’t they? Even Monopoly boardgamers enjoy them from the Bank.

Quite the choice to find your fit.

Then what of substitutes for the titled? How could you name the “project”?

It goes without saying it should not travel anywhere near competitive branding.

Nor ought it be a slavish replication of your own marques.

Better is something that matches the prospect mood, personality, language.

I think about times when a prospect of mine was moving, renovating, building. Designing, rendering, remodelling. Adding, subtracting, multiplying. Something which will set your bid apart and is eminently rideable.

You could also use this ‘result’ to help ease minds away from distracting switching, sunk, setup costs. Shift focus towards the value you’ll enable. With a cheeky nod to opportunity costs. Every equation has an “=” side to fill.

Then maybe you and your prospect can avoid the hole fallen into by “leaders” a generation ago. As reflected on by Margaret Thatcher in Statecraft;

“The West as a whole in the early 1990s become obsessed with a ‘peace dividend’ that would be spent over and over again on any number of soft-hearted and sometimes soft-headed causes. Politicians forget that the only real peace dividend is peace.”