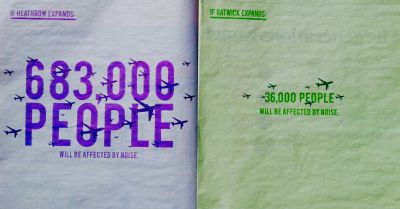 Almost eighteen months ago I remarked on a decent piece of Proposal design and presentation by London‘s Heathrow airport.

Britain’s politicians have made a complete mess of expanding the capital’s jet capacity.

Without doubt the answer is a Chek Lap Kok style Hong Kong treatment, to the East of The City.

Yet somehow, vainglorious vested interests mean there’s a blag-off between Heathrow and Gatwick.

Not to be outdone, the Gatwick campaign (with un-Britishly bold title Gatwick Obviously) also pitch through bought national broadsheet newsprint.

Two angles occurred to me from their current campaign.

Firstly, they’ve decided what their sole key selling point is.

My own small pic up top of the actual paper double-page ad shows that Gatwick judge personal upheaval their not-so-secret weapon.

Incidentally, this is stark contrast to another major infrastructure battle of the day. HS2. A high-speed rail link from London northwards. First-stop Birmingham. This vital project imperilled because the muppets running it focus on the high-speed feature, rather than the blatantly essential capacity increase need.

The distasteful suffering of the purple team shown to dwarf the lessened discomfort of their green option. (I know not of reasoning behind the colours).

So it’s clear on how they wish your choice to be made;

if Heathrow expands: 683,000 people will be affected by noise

if Gatwick expands: 36,000 people will be affected by noise

And helpfully they even plaster more and fewer planes for extra oomph.

I quite like the consequence that their solution is in smaller print. Normally, the preferred self-promoted option is bigger on the eye. Here less really is more.

And easy to apply to a solution sale slidedeck or Proposal page too.