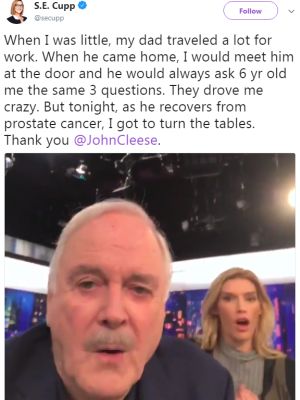 These are the three questions global comedy icon and father John Cleese would ask his young daughter upon returning home from a work trip.

Which, as she recalls on twitter during Summer 2018, drove her up the wall.

I’m reminded of a pair of recent blogs where I look at what you say to someone new at a prospect the first time you bump into them. (via a tv channel ad & eating ideas.)

I’ve also encountered service centres where the boss asks a specific same three questions each week of their operations staff.

What gets measured gets improved, as the old adage goes.

I liked the Cleese idea. Especially the “quest” question.

I did wonder whether the syntax is perhaps a little too ‘disney’. Yet imagine someone you meet when selling asking you that. How would you answer?

Hopefully in part by outlining the problem you resolve, by the way…

Then how about asking a prospect the same?

After all, a fundamental platform in solution selling is uncovering where the prospect wants to get to.

I also recall opening meetings where a winning starter on a formal bid was a playful, smiling, “well then, what’s the big idea here?!”

The comic used three. So maybe ought we?

You could opt for gradual alternates of the remaining pair.

What’s your favourite colour project idea at the moment?

Or go for a different structure altogether. I remember the useful pair of star acronym steers which lead you into something along the lines of;

and with what hoped for result?

In any case, a quest you can certainly add to your kitbag.