Flip-flops, thongs, slops, zories, plakkies. Summers over the past decade has seen a tough battle for your beachwear -sandal cash.

I happened across a market stand exclusively selling both. An array larger than any of the stores in the vicinity.

One relative of the stallholder was 14-year old Alexander. Grabbing valuable work experience during school holidays.

I tried gauging where his selling acumen may be at. I asked him what questions potential buyers gave him.

Aside from the size-in-stock questions and how they looked once tried on, the one that caught my ear was;

Such a devilish query. A true test of seller-ship.

Upon hearing a couple of times, the youngster quietly googled to find out.

His initial stab was;

All by himself he’d got a plan.

Whatever the merits of this comparison – imagine how marketing execs at each firm would judge them – the point is that he came up with an answer that led neatly on to further conversation which channeled the browser into becoming a buyer.

The comfort was apparently because you don’t need to ‘run them in’, fitting nicely from day one. Durability didn’t yet appear to have anything behind it, as most people recognised that they were the ‘classic’ market-shaper.

I must say, that given the distribution approach of both labels alone, my vote would go to the (typically slightly dearer) Havaianas. Their wholesale packaging matched the quality of their wares unlike Ipanema’s.

Anyway, this is a question that can sidetrack many a more seasoned seller.

The trick, like here, is to try and not give an assessment that overtly leans one way or the other. But rather give opposing and crucially non-antonymic (not two sides of the same coin) desirable qualities that force the prospect to consider their preferred trait.

Then have follow-ons up your sleeve that funnel selection to a purchase.

I googled myself, and perhaps this was the page the teen found, from a UK flip-flop shop; 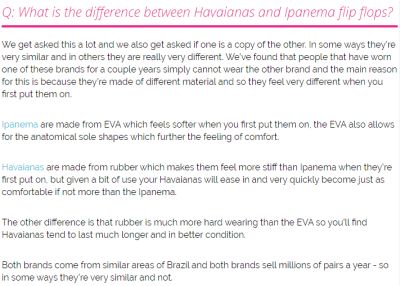