The UK’s political calendar has long had a three-week window built in for the various annual party conferences.

The arrival of the Autumn equinox heralding a shindig of speeches, fringe events and chance to thank the door-knocking grassroots faithful.

Convention has it that the ruling party gets to go last. The main Opposition, the week prior.

You cannot escape the highlights packages on each final day, when the set-piece Leader speech happens.

Here’s a trio of tips from what the main story entailed for the pair in their respective hotseats.

1. Make It Short, Then Cut Some More

Sadly for the Opposition Leader, his headlines were about a lacklustre effort that which – and here’s the crucial glitch – went on way too long.

It seems the main reason for this, lay with the inexperience of his team. Having been in post only since a month into the pandemic.

They ticked off one essential task right. They ensured their man rehearsed. [see footer for more on such preparation]. What they didn’t factor in though, was audience reaction.

According to commentator of the Left, John Rentoul, said run-through was under an hour.

Yet in the auditorium, Party rank and file were so eager to signal their support of their new man, that they peppered almost every full stop with applause. Frequently resorting to a standing ovation too. This elongated proceedings significantly.

The result was a bum-numbing 90 minutes.

With further problem of compounding the speaker’s reputation for over-lengthy, complicated and dense expression. As adding to the twelve thousand word essay he wrote in the conference run-up with the aim of explaining where he stood. Spoiler alert; most media reported that his firework failed to light.

The squib dampened to sopping point when also considering – the perhaps consequently shortened further – competition the next week coming at a breezy 45 minutes. Half as long. Widely reported as ‘punchier’.

Think about questions, interventions, laughter and pauses all generally taking longer in theatre. And make due allowance.

Also consider the main touted difference in approach here when editing the draft. The lawyer strove to put as much in as they could. The journalist kept on crossing bits out.

The incumbent Prime Minister is forever criticised by opponents for lacking substance, wandering off-topic and using his considerable oratory skills to sidestep scrutiny.

His 45 minutes in the spotlight did little to assuage them.

The detractors after wheeling out their centrally agreed dig; “all punchlines, no plan”.

Yet is was hailed a ‘barnstormer’.

Whereas the previous week’s address went (too) deep into policy detail, his rather chose to talk in themes.

It seems to have emerged victorious because he twanged the emotions.

He has his anti-Illuminati baiting Build Back Better slogan and keeps chiefly to the headlines.

Which neither Left nor Right can really argue with.

More tax means fixing the public health system and the like. He wants his economy to be a high-wage one. And loves the phrase “levelling up”.

The outcome though, is that talking themes alone leads to positive audience recollection.

Prospects might want to get grubby with the innards of your machinery, but when in key multi-person forums, they are more moved by hearing why you are doing something for them, not the what of it.

Perhaps the clincher, the Prime Minister understands not only how to pick an enemy – for that is obvious as he squares up across the Benches of Parliament – but how to frame their presence.

His main label for the other man vying to be next PM, is Captain Hindsight.

The Opposition have many names for the PM. Most of them unprintable on a business blog. Yet none stick. Unlike his main name for their flagbearer.

Here’s the key excerpt that made the viral clips (using context of pandemic ‘management’);

Cue raucous applause from the converted.

He not only rammed home the main pejorative nickname, but offered a pair of new siblings. And then even gave a random but sticky cultural reference example to pinpoint the absurdity of their thinking.

We may not possess the resource and deft of the political speechwriter, but we do have an enemy. Not a person or entity as such, but a process or malady restricting doing business better.

We likely already have ways of describing it.

You might not wish to share such intimate thoughts with prospects, but they’ll certainly drive you and your team on more each day.

The keynote speakers these days rush to post their hard-work on social media (because there is no longer room in the public discourse for describing any job or discharging of one’s duties as merely ‘work’).

Strangely though, only the wannabe next Leader of either of the two main parties vying for power did so around their conference speech preparation:

With all the soft-focus and poise of a mid-range clothing catalogue shoot.

Still, the point remains valid. At least this man did his prep.

The sitting PM & Opposition hopeful did offer up a snap, although it seems only for the print media: 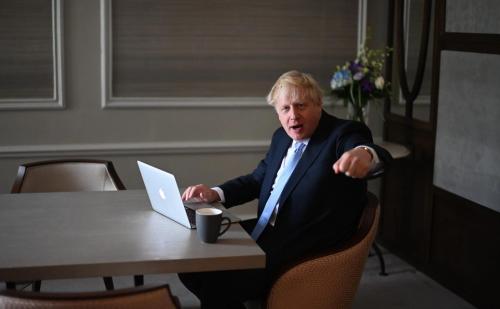 Does this really have the air of proper prep? Or is it simply meant to promote a rep for being a natural at all this, both in terms of solo wordsmithery and delivery?

Likewise, away from that Manchester hotel meeting room, the Opposition chose a similarly luxe shot overlooking the Brighton shore; 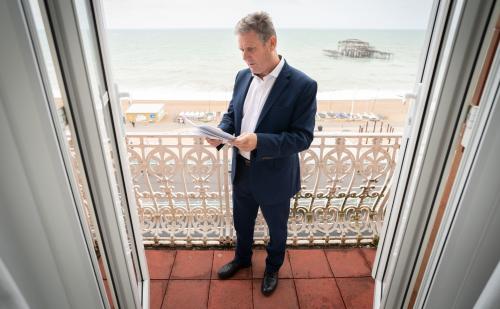 What you make of any metaphor from the burnt out pier is for your own teabreak chatter.

This is less about wherever you are doing your rehearsal, but that you do it at all.