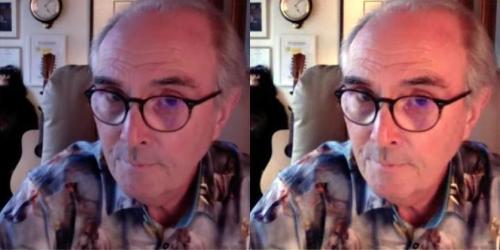 note the difference lighting can give you on your video call; (L) as presented, (R) brightened post-broadcast with filter (& feel the perils of a high-back ‘exec’ chair…)

You do worry when someone describes themselves as a mind coach, don’t you.

Don MacPherson was talking all things ‘monkey mind’ which may hold you back and how to overcome them with the always watchable Rob Rinder on radio/tv.

As a man myself that once began a funeral tribute (PJ, we miss you) citing glossophobia and logorrophobia (they mean pretty much the same fear), I warmed to the start of their discussion.

The host showed off in his inimitable manner that the former term derives from the Greek. The root glosso- meaning many tongues, or in ancient times, to talk. Also offering up the delight of the dismissal of nonsensical gibberish; glossolalia. Meaning speaking in tongues.

The premise for the segment was that a survey found three-quarters of Britain’s – yes, 75% – revealed their biggest fear was of public speaking.

The proper term for this, being the aforementioned glossophobia.

Even the most seasoned of speakers can be afflicted from time to time.

Then followed the author’s trio of quickfire tips to overcome said fear:

To slow it down takes control of your emotions, and bodily functions will follow.

Giving an example exercise. Take three successive deep breaths. Saying this after each exhale (at the end of each ‘zen breath’);

I am calm
and I am relaxed
and I am confident

Reiterating that anxiety makes us do everything quicker. And in speaking terms, an ever-rising higher voice too. The quote here being;

nothing rushed was ever done well.

So don’t be afraid of pauses. They can help engage your audience. True inner peace is in the silence. Pausing before answering can own the room. (An old example given with why British PM half-a-century ago Harold Wilson used a prop of a pipe on telly when he normally only smoked cigars, specifically to give him time when answering questions by putting it to his lips and out again.)

Pushed for time by this stage (our Rob does like to but-in to other’s time!), we were served up this pair of self-help mantras;

Urging us to do a spot of what the sporting pros call visualisation. See yourself beforehand in your mind’s eye scoring the goal and that goal you shall score when on the pitch, goes the theory.

He’d even ask the kitman the day before what shirt, shorts and socks they’d be in the next day. Then imagine himself scoring in that strip as he went to bed.