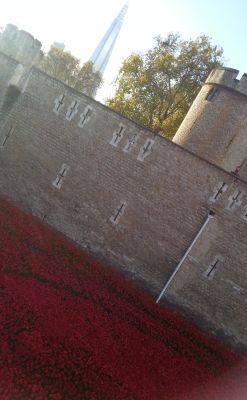 It was such a winner. So unexpected a treasure.

An entire nation loved their World War One poppy installation at the Tower of London. 888,246 handmade ceramic blood red poppies to celebrate the life of every British and Colonial soldier who perished at The Front.

Weeping Window and Wave was inspired by an astonishing phrase found by accident in the living will of a Derby lady who’d disguised herself as a man to fight (and die), “blood swept lands and seas of red where angels fear to tread”.

I was lucky enough to see this amazing work when in place around the moat of the Tower of London.

As different cohorts of the flowers spread for their permanent exhibits after touring throughout the centenary remembrance of The Great War, I learned yet further inspiration from how the whole project got off the ground in the very beginning.

Sculptor Paul Cummins had the idea.

So ambitious in scale and scope, he set off to find a venue.

A public place with connections to the war and of a size to accommodate the vast plan was not in plentiful supply.

He approached the London Parks. No success. To hear him recount the tale, it doesn’t sound like he was even granted an audience.

In one respect, hardly surprising. An (unknown) artist pitching an expensive commission. Like so many responses to unsolicited calls, you can imagine hearing a dismissive, “we get hundreds of calls like this, you know…”

And just like many of our solution sell prospects didn’t know they’d a problem until we said we could fix it, who had on their to-do list: “WWI artwork”?

Then Paul had that killer piece of fortune. The kind that seems to shine of many a successful project.

His fourth ‘prospect’ was the Tower of London. How on earth would a lowly artist ever get to speak to the main person at such a hallowed institution? Even their very job title enough to put the shivers on you; Keeper of the Keys.

Well. That man had a friend with the same name.

What are the odds?

So the flower-maker’s call got put through because everyone there assumed he was ‘the friend’.

The chance was duly taken. On his own admission, he didn’t stop talking until a meeting had been agreed.

And the history, is legend.

So next time you’re dispirited, looking down a long list of impossible names to cold call, remember Poppy Paul.

Your fortune could be on any call, but you’ll only find out on which, when you dial.