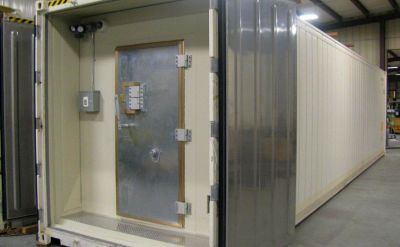 It’s the pronunciation of the acronym, SCIF.

It comes from the name for the room where documents are kept that must not be read elsewhere.

The concept was known to me from the legal sector.

There I’ve known places hired and guarded in hotels and serviced offices with sensitive due diligence paperwork to be read by M&A eyes.

In those cases, whilst no copying was allowed, you were permitted to make notes. That is not the case with anything inside a ‘scif’; or Sensitive Compartmented Information Facility. Which, as you can see from the pic up-top, can even be fashioned from a standalone, unconnected, old shipping container.

This particular flavour seems to emerge from the military. Now making global headlines due to housing a seventh background check week-long FBI investigation into a nominated judge for the US Supreme Court. Where the selection panel of 100 Senators can read the 46-page report but not divulge its contents outside.

The surrounding media fuss made me think of our most sensitive Sales info.

What is it that is most closely guarded?

For us, it is probably along the lines of margins, feature wobbliness and negotiation redlines. Although in the right circumstances, each of these may well prove a useful tool to share to victory.

For our potential client, there’s the spectre of revealing what their actual budget might be, the dominant decision making criteria, and who it is specifically that will truly be making said decision.

So perhaps the solution selling reminder from this week’s skiff-age, is that when dealing with prospects, what is the skiff data they hold, which we’d dearly love to know. And how can we best draw it out of them.