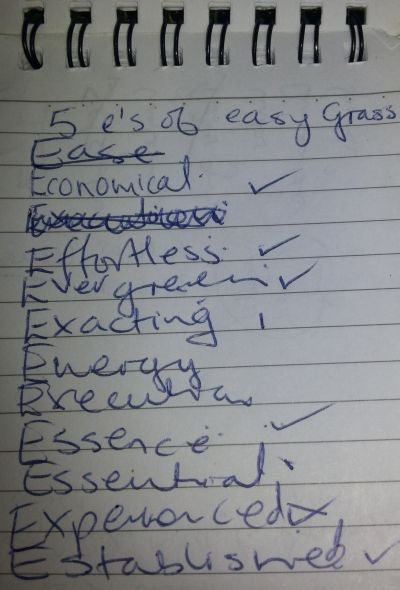 You may have read my recent musings on what I consider a great little tactic. Framing yourself by 5 words, all beginning with the same letter.

Well. I riffed with a pal of mine, in the midst of beefing up his website, about being able to answer the typical, yet unassumingly dastardly, question, ‘what do you guys do then?’.

The pic above is our quickfire brainstorm to select 5 words that sum up why he does what he does, and furthermore, where he feels set apart from alternative providers on his, ahem, turf.

They begin with ‘E’ as that’s what his company’s name starts with.

Aligned with this, I also showed him the recent Twitter PR site with a terrific approach to testimonials.

How he intended to use all this, was to list his five words, and tell a story about each one.

Take ‘Essence’. He loved this particular word because it evokes the calming and cool effect his greenery can have on a previously desolate space.

He takes ‘before’ and ‘after’ photos of his installations. The two examples he gave about this were wonderful.

The first, was at the grey, dark and unwelcoming exit of a world famous tourist attraction.

Those running the show were irritated they never sold anything in this area.

Once they put in the synthetic grass, sales soared (…be great to know by how much). They found people felt relaxed and happy to hang around and browse in the newly feel-good space.

The second, concerned an outdoor jungle gym and playground at a renowned shopping and leisure destination.

Previously, all the parents would frustratedly stand around the sidelines. It was tarmac all over. The children played on their own, and not for very long.

Once the astroturf went down, the whole atmosphere changed dramatically. People lingered longer, parents joined in with their kids, smiles were everywhere.

He went further. About to have new business cards printed, he wanted to have his ‘5 Es’ on the back, with a brief strapline for each.

Once you nail your five, they’re so simple to remember and great to recite when someone asks about your business.

We both had a lot of  fun doing this exercise and you could also feel the vibe was one of being pleasantly energised.

To truly succeed with this, I reckon he should go further. Think of 5 words for his chosen market sector. Imagine, for instance, if he could ‘own’ the five Xs of No Maintenance Greenery. He could mow down the competition…