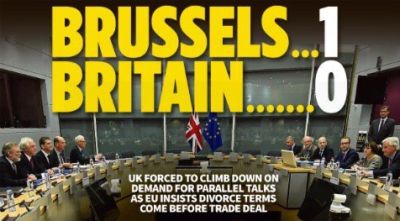 As I noted a few days ago, salespeople unintentionally and sometimes excusably tend to be rubbish at negotiation.

So those selling in Europe may well take close heed of the brexit negotiations which began yesterday in Brussels for tips.

One pillar that appears at odds with commercial deal-making is that both sides have gone out of their way to make public their stance that the two parties are not adversaries. It is indeed refreshing to hear both state win-win as the only acceptable outcome. Whether this is heartfelt we’ll wait and see. We can but hope. Yet this should be the flagstone of any negotiation.

As you’ll see from the pic up top though, the media seemed to have already anointed their winner.

Here’s another take, from a London Telegraph cartoon; 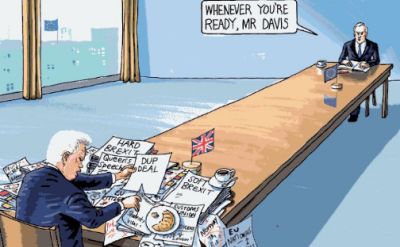 Even the Biased Brainwashing Corporation (BBC) had a reporter in Brussels (Katya Adler) who revelled in a ‘climbdown’ suffered by the UK’s lead negotiator; “given in on what he pledged to be the ‘row of the summer’ “. Fake news. Totally. Again. Here’s why:

The opening positions on the point concerned – when talks on the eventual, new trade deal begin – were (EU) not until everything else is done and the UK leaves April 2019, set against (UK) alongside the rest from the beginning June 2017.

Yet the agreed position settled upon yesterday was that future relationship talks would hopefully start December 2017, with so-called ‘divorce and exit terms’ having been settled. This is now termed Phase Two, dealing also with whether a transitional arrangement should be in place.

Which strikes you as a typical compromise. One conducive to the fair-minded, “constructive atmosphere” you wish such talks to exhibit.

So what can we sellers take from these early skirmishes?

There can be no better prepared teams in political deal-making history. A period of twelve whole months has preceded the start, in full knowledge that they were coming. We might not get a lot of time on our deals, but what little we may be given must be used. Wisely, too. How many sales negotiations have you been in where you feel someone pivotal does not know their redlines, baselines, leeways, options or trades?

There does appear to have been some significant groundwork done before the main event. Scouts appear to have met to determine what would be discussed in which order. A good lesson for selling otherwise you end up gong through the contract small print of one side or the other in numerical clause order which can be soul (and commission) destroying.

As well as the structure, Phase One topics are agreed on Day One (Irish border, citizen rights, possible exit bill). They also agreed that there must be an orderly brexit.

A platform for moving onwards whilst sticking to your initial thrust (“the position hasn’t changed”) is a good sign. Imagine negotiating on a bid and when you’re doing your first meeting post-mortem outside the room after you realise everything has been thrown up in the air. Make that early progress explicit and straightforward.

Perhaps also here, the tactic of the UK side to make the other feel like they’ve ‘won’ something also comes into subtle play.

The UK side announced themselves as a “determined optimist”, quoting Churchill to the chuckles of the assembled press. Keen to “build a special and deep relationship”. Both sides sounded confident and upbeat. The EU stating ‘this isn’t about punishment or revenge’. All in all, “positive and constructive” on Day One. Something we’d do well to mimic.

Tricky to replicate in the world of anti-corruption lest you be seen as offering an illicit bribe, but can be a winner if done like here.

The two leaders exchanged gifts at the outset. Surely pre-determined, yet show wonderful intent. A hill-walking stick and a guide to a famous foothills. Cue MSM sniggers about having a mountain to climb.

Tended to be gifted once ink dry, corporate presents – especially like sporting hospitality – have taken a pounding in London this past post-crash decade. Yet something small yet meaningful can create a big plus.