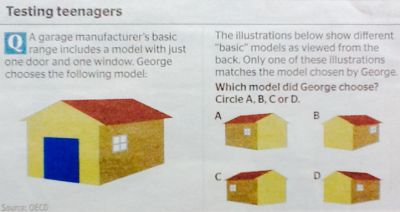 Something for your next internal Sales meet slidedeck?

One of my more tedious business school memories way back then was the ‘human resource’ module.

“People”. Or as the lecturer – with her name deliberately shorn of its ending feminine vowel to protest some kind of gender ambivalence – often put it, “context and self”. Really.

At the time, this was drowned in the general verbiage to me.

Yet as solution selling skills rose, the ability to genuinely put yourself in another’s seat and truly look at things from their perspective became priceless.

If only she could have articulated thus.

So the other day, there was wide media reporting of the OECD looking at what poor maths costs a country. In Britain’s case, if the one in five teenagers currently adrift can in future reach the basic numeracy level, then over the next generation the economy could benefit to the tune of £1.7 trillion. So they say.

London’s Times published the delightful test question as I photo’d above.

I love these kinds of non-verbal reasoning.

As with all in this camp, much depends on spotting the angle of the questioner. Once you’ve mastered a general style, you can often clean up.

This alone would be a cool poser to put up between weightier topics for your assembled Sales colleagues.

Yet it can be used to make a strong point.

Namely, are you viewing everything from your prospect’s real situation?

Are you blind to their blue door?

Is the window you see the one through which light shines on them?

Would the rain harvest run off away, or be captured your way?

Is there a rear entrance, where back door guests are best?

Which OECD answer would you circle?