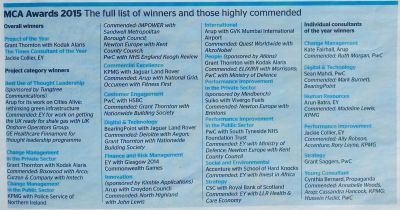 “Take your watch then tell you the time”

Management Consultants get a bad rap. The reality is that when you find that visionary ‘third eye’, they are priceless to you.

Yet the good are sadly rare.

The same can be said of just about every profession you care to name.

Hold your breath, but I have even found a decent property agent. Mind you, I’m yet to encounter a noteworthy banker.

Still, whereas I might be inclined to praise the broad activity of consulting (full disclosure; having earnt a living as a freelance in this realm myself), I often despair at the shockingly low calibre of such fee-chargers. Even (especially) the self-styled bluechip ones.

I often remind those contemplating big-ticket ‘consultancy’ that the word derives from the Latin, ‘discuss’. Though it’s never the talk around what to do, it is in the doing. If you’re not careful, all you get is the “chat”.

Anyway, my heart sagged when I read an insert in London’s Times newspaper. The proponent’s own MCA Awards 2015.

It was pretty sobering reading.

The reporting of the event did little to showcase their stated aim “to demonstrate and recognise the value of consulting”.

So damned be the collective’s standing, that the ‘consultant of the year’ doesn’t even call himself ‘consultant’. Although alarmingly, he considers he’s rather an “economist”. And for that breed my thoughts are totally aligned with Charles Handy. How do you get three opinions? Ask two economists. And all that.

I felt a huge opportunity missed.

That’s my photo up-top from the actual newsprint.

Whilst it’s pleasing to see the last-century functional framework not wholly in place, the one glaring omission is upfront acknowledgement of Sales.

You could argue that neither topline nor margin could be fully involved. Especially considering commercial sensitivity and recording discrepancy.

On the basis that most consultancy is about ‘change’ or ‘innovation’, it is remarkable that meaty topics such as disruption, turnaround or collaboration aren’t given their own spotlight.

Although the absence of “prospect” from this label yet again shrinks the belief of all those new business tigers on which any enterprise would be lost without.

Their seemingly data-driven, Marketing leaning “Customer Engagement award” this year involved “customer-centricity”, “financial and customer dimensions”, “flagship”, “dashboards” and “scorecards”. As existing customers were flagged according to the “two or three moments” that mattered to them.

This mention of “moments” does intrigue me. Another potential flag-bearer for AIOs and psychographics.

No uplift figures given, yet a case of knowing ‘when’ to sell perhaps, rather than ‘how’.

More worrying, the shortlist comprised of three (retail) bank projects and one heath. Does this portray the true state of “sales consulting”, with only these (non-b2b) sectors willing and able to fork out for it?

So. Less than half-a-shout deep inside one of twenty-three windows.

And even then, lagging behind in the champagne-popping wake of marketeers.

The trip along the lengthy road to respectability continues.