Someone working years ago for English brewer Bass told me of efforts to re-launch their Tennents lager in the mid-Nineties.

At the time, this was the kind of tipple that most people would associate with drinking at 10 o’clock in the morning. After waking up on a park bench. Its brand image, especially for its higher alcohol Super and Extra labels, wasn’t classy.

For the relaunch, the marketeers decided to split their customers into three groups. They identified drinkers as either an Abuser, Hedonist or Connoisseur.

You suspect they may have felt that those loyal to Tennents were Abusers, and their challenge was to persuade Hedonists and Connoisseurs to try it and take it up.

The brand is still with us today, suggesting perhaps that these efforts bore fruit. Also, the team behind this thinking enjoyed a purple patch in this era. Just about everything they touched turned to liquid gold, including game changing Caffrey’s and Hooch launches.

Although this is a marketing tale, I gather that both the street and office salesforce were involved in this process. It strikes me as a valid exercise for anyone looking to unleash something new into their current marketplace.

Many b2b sales teams are often left remarkably to their own devices when it comes to a new launch.

Categorising your prospect behaviour and intent can both eliminate wasted selling effort and give the initiative a greater sense of purpose. In the drinks example here, it might have been an evolution of classic 2×2 grid construction, where the high to low scale could be applied to axes of consumption strength and frequency. 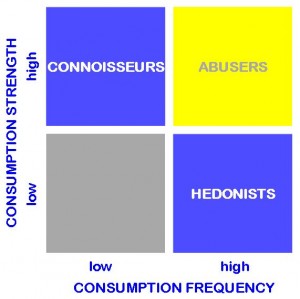 Or it may have a been a taxonomy based on quantitative measures. 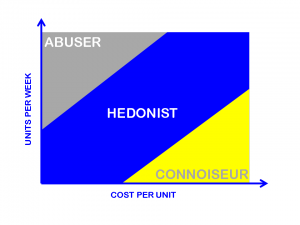 It is likely that most launches could adapt this analysis for greater clarity and bring personalities to life too.