I recently found a folder of work I did almost twenty-five years ago. It’s now been packed off to recycling.

I couldn’t resist a rummage, and found a batch of old-fashioned ‘transparencies’. In the days before omnipresent computers, if you wanted to pre-prepare slides, you could go through a reprographic rigmarole to produce your small sheet of plastic that got lit up by an overhead projector.

With colour and text adjustment, here’s three of my slides from back then. Firstly, I was dealing with some cumbersome stats for sales figures and forecasts. Rather than graph them, I elected to index-link two data series so the two different types of numbers could be more easily compared, using a base-year.

Next, I broke down sales figures for three different products by a trio of factors. My constraint was that it was tricky to show the intricacies of the axes, so I chose to show scaled blocks. 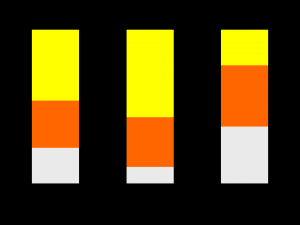 Finally, I tackled four different numbers. You can see the one set that interested me most. 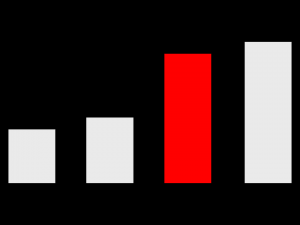 Although from when wet-behind-ears, this is a neat reminder not to stick to standard graph-wizard laziness and generate graphics that distinguish from our competition.