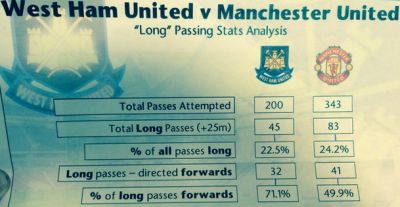 Louis van Gaal. Comedy gold. The funniest people are those that produce gags when they think they’re being serious. Enter the Man U-managing Dutchman.

To fend off accusations that his team had become ‘Long Ball United’ to draw their last match, he produced a remarkable handout at his press conference this week.

In the footage the rolling-eyes of the PR lady sitting next to him was a picture.

He was trying to make the point that his side’s proportion of “directed forwards” passes that were the oft-ridiculed “long” was less than the opponent’s.

And produced the natty table you see up top.

As presentation goes, the display has potential.

Yet there is great scope for improving the punch.

It reminded me a touch of the Top Trumps cards I used to play way back in Junior School.

Yet for us solution sellers, there’s a compelling point here.

How often do we succinctly set out why logically we are the better option in this manner?

This tactic would probably only truly work when pitted against a status quo (I never bad mouth competitors, preferring never to even refer to them at all).

Yet this approach’s simplicity could well be a real winner.

Especially when your numbers all add up to an irrefutable amount of monetary magic.