So one evening recently I was sitting in front of the telly. Nothing much worth watching was on.

My mind wandered to a post I’d read a few days before by presentation zen. It touched on how to use people’s quotes on slides.

The next morning I was due to call someone and one of the points I wanted to make was fresh in my mind.

It built on when vital knowledge goes unacted upon when changes occur. The phrase that stuck in my head was when things get “lost in the cracks of the pavement”.

So I thought I’d practice making a slide along those lines. Take the zen-presenter tips and pop a quote on it.

I chose a song from the biggest selling popstar on the planet right now, because it obviously followed my ‘theme’. I used the mp3 download artwork and added a few relevant lyrics from her hit, Chasing Pavements. Hey presto; 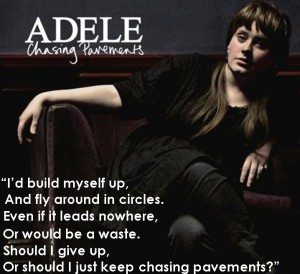 It was just for me. An enjoyable test-of-concept. I quite liked it.

Then the next morning at the allotted hour, the person I was to reach was unavailable.

Knowing him to be a fine protagonist of selling, and aware of his affection for the quirky, my voicemail mentioned I’d send a pic on as a bit of fun to remind me of a key point to make. I thought about this on the spot, as I knew he was out the office and he would see the pic fill his Blackberry screen.

I felt it’d put a smile on his face. A useful road-test of an idea.

When he called me back though, I wasn’t too sure my pic received a warm reception.

I know what it’s like to run a business. Have your only boss as the customer, with several people reporting into you. I often yearned for someone to be a bit different. Especially suppliers. And see them try to push into new frontiers. So this kind of thing was right up my street.

But sometimes, does that mean you can go too far? Stray into the supposedly unprofessional?

Five years ago, I met the founder of an email attachment search software.

He set up in part because he felt that prospects never read the pdf you send after a meeting. You take ages to craft a doc, confirming and pitching all sorts of great points, then no-one bothers to open it. At least if your prospect had a desktop search that allowed the interrogation of all corporate computers, you might just end up on a results page someday.

I half-agreed with him. But I felt there was a good reason for this. Most people sent impenetrable word docs. Hardly inspiring and crying out to be avoided.

So I got to start sending pictures. Rather than a word doc. Wherever applicable, I’d get into Powerpoint, make a cool infographic, and hit send.

When the receiver sees it’s a pic, rather than potentially turgid War & Peace, it might actually get opened.

And ever since, my philosophy seems to generate supportive feedback.

Maybe until now. Perhaps it’s a tap on the shoulder to rein things in a little sometimes?

I happened to know the recipient shares my liking for 80s music. So if I’d have done this as part of an intended, deliberate piece of work, I may have been better off with this treatment rather? Then again… 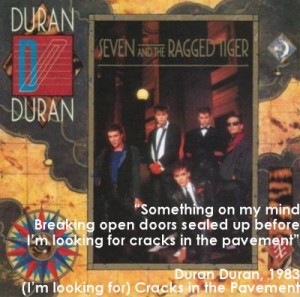