National treasure Stephen Fry took over an entire evening of a nationwide terrestrial broadcaster last bank holiday weekend to indulge in his list of 100 best ever gadgets.

Here’s his introduction for his top all-time gadget.

I was reminded recently of a story of a friend of mine who was with a group of explorers who went on an island far, far off New Guinea.

They encountered a tribe that had never seen Westerners before and were deeply impressed by the gadgets – 1950s gadgets – that everyone was carrying with them.

My friend was particularly excited becuase he knew that the next day a seaplane would be landing nearby (they’d radio’d ahead) and he thought, ‘their faces when they see that we can fly…’

The plane duly landed. He pointed up and the tribe looked.

They were distinctly unimpressed.

After a flurry of interpretations he discovered that their reaction was this:

Well, of course you can fly. You can make flame come from your fingers.

I instantly recognised this syndrome. Perhaps we should call it the Lighter Effect.

Time and again I have seen salespeople highly animated by the latest new bell or whistle added on to their wares. It could be a module, a button on a screen even, or a whole new capability strapped onto the side. In their minds (maybe even correctly) it is awesome and opens up a whole world of possibilities.

When they get to presenting the shiny new thing, they are met with expressionless indifference. It frustrates them to such an extent that a gap emerges between prospect and pitcher. The energies of the two diverge. A meeting of minds switches into a gulf of enthusiasm. One now struck by apathy, the other anger, even. And everything grinds to a halt.

The message is clear. When you have a new seaplane, don’t forget about your pocket-lighter.

It reminded me that it’s not the order in which things are invented that makes them the most impressive. It’s the importance they have to humanity.

For ‘humanity’, also read ‘your prospect’. As Mr Fry signs off,

So my number one is this. [uses lighter] Fire with a flick of the fingers. 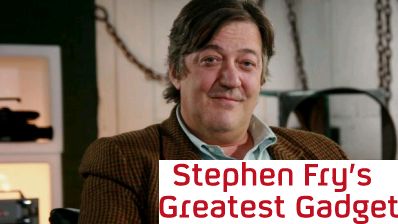