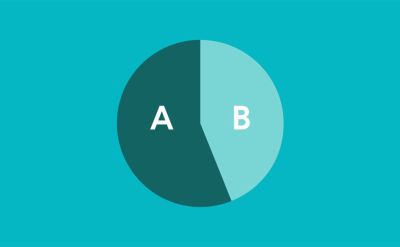 Email subject lines can cause Gordian contortions throughout my cortex.

But fear not, AI is about to be at hand.

I was alerted to this upcoming tsunami of algorithm produced text via examples of computer generated ad straplines. And some were pretty decent. Its proponents suggest that tech takes more risks, and enjoy greater reward as a result.

Once set free onto an unsuspecting web, manifold options are assessed as in traditional A/B Testing.

This is a concept familiar to marketeers for working out which specific language elicits higher response. As well as coders, seeking to determine which screen design does likewise. And it should also be part of a salesteam’s thinking. Not all pitches, objection handles or slides are the sole option available. How are we tracking which truly is the ‘best’?

Admittedly, we are often without the luxury of mass experimentation upon which these ‘big data’ style solutions set their sights. Add in the widespread reluctance to try something fresh on a bid when there’s an acknowledged chance that it might not be the ‘optimum’ tactic and you’ve a worrying recipe for standing still (if you’re lucky).

I note that one firm forming this space (Londoner’s Phrasee) use an alternative term (thankfully not another such label, multivariate testing) for this; split testing. One of their videos as in the screen captured above helpfully shows results by way of pie. ‘A’, yummy.

Given that their job is to show which of sometimes several choices win through, I was intrigued as to how they displayed this with imagery.

The often aficionado-derided pie is useful for a binary choice. Yet for a trio, they opt for a more basic, akin to tabular approach. Here I’ve combined three separate slides; 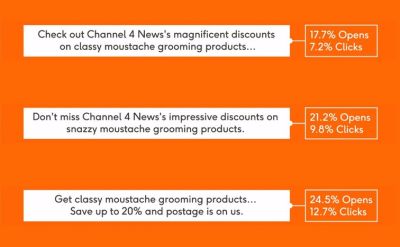 Then they opt for comparing five options. Many plump for the good old barchart. They pleasingly mix it up a touch here. The web as a radar chart; 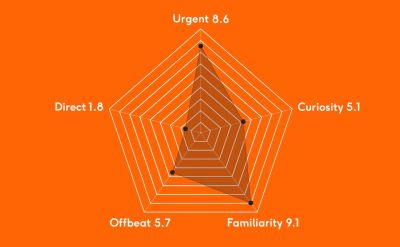 And lastly, when wanting to show the “hundreds of reasons” why one selection may beat or lose out to another, they swap a word cloud or bullets for the mass of text; 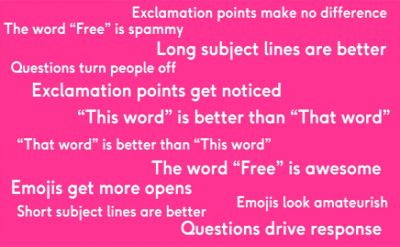 These come from their own sixty second video advert. In the absence (yet) of chartbots to tell us which type of graphic to use, these are contemporary views on which to chew for our own images.