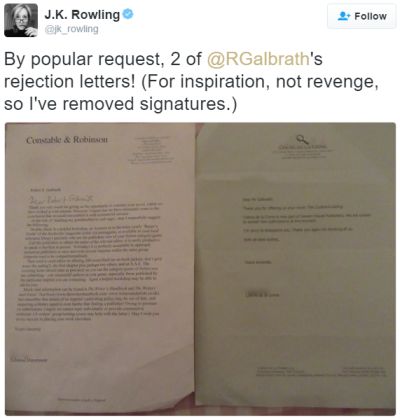 Here’s a tweet from JK Rowling, 25 March 2016, which created quite the reaction.

In case you don’t know the story, the megaselling Harry Potter author’s next project wrote under an assumed name. As she’d been famously rejected in the Beatles-esque ways for her wizardy, she also sent her new crime manuscripts to publishers. The responses were equally dismissive. Doubly alarming as when eventually in print her secret nom de plume earned plaudits aplenty.

The left-hand letter elects to soften the rebuff with words of advice for aspirant storytellers.

The phrase that seems to trigger most opprobrium is;

Then send to each editor an alluring 200-word blurb (as on book jackets, don’t give away the ending!)

It never states why “commercial success” would prove elusive.

Yet does suggest you research and ring the relevant genre editor at publishing houses of your favourite authors. The inference is that this is exactly what JK Rowling had done here anyway, exposing a boilerplate rejection letter trying to masquerade as actually caring.

You should also send the “first chapter and perhaps two others”. And a self-stamped address envelope. As if a winner will be ignored on the basis of not wanting to pay for postage themselves.

“May I wish you every success in placing your work elsewhere.”

Publishers likely claim they receive more pages each week than can be physically read by one person in an entire decade.

Corporate buyers that shun my advances similarly claim – through curt PA-relayed goodbyes – that they too must fend off an avalanche of cold calls. Yet the ones I meet suggest they seldom field any.

I could go into the merits of cold approaches in the style of bands that used to send demo tapes through to record labels, versus being introduced by the brother of Brian Epstein.

Rather, let’s focus again on the “alluring 200-word blurb”.

No format, style nor theme is suggested by the supposedly helpful company.

Two hundred words is half of this post. Such prose in an email looks too much. On a side of paper, too little.

I’m reminded briefly of the 100-word story meme. Perhaps the ideal shot is to set the scene, lay out the mystery, in that kind of vibe?

So our new product pitches could spell out where the hero (someone needing our wares) is at now, the daunting troubles ahead, journey choices open, and tantalise…