Danny Boyle directs Michael Fassbender in the title role of 2015’s Steve Jobs. Kate Winslet won gongs a plenty for her work-wife performance alongside the Apple co-founder. Shining as the marketing cheese trying to keep the maverick boss on track.

It’s a slick piece. The look, pace and dialogue all sharp. Yet sadly it does not work as a movie. The characters feel strangely two-dimensional. Their conversations contrived. Unreal in many places.

Set around three separate product launches (from 1984, 88 & 98) there is though the odd Sales nugget.

Backstage before each one, Job’s life and the new product take turns to crash.

First up, the Mac computer. It won’t say “hello”. A – the – vital demo wow. The solution? Sleight of machine. Use the prototype next-in-line which has way more power and can speak, just for that bit.

Ethical? Well, many a tech demo dolly will readily recognise such dilemma.

Still it sets the scene well. Jobs doesn’t seem to care much for customers. He repeats throughout that he doesn’t believe they know what they want until he tells them. Highlighted by one of my favourite lines of his;

“Whoever said the customer is always right, I promise you, was a customer”

I can think of several variations on (and additions to) this theme. Well worthy of a cheeky internal slide to ignite discussion.

Leaving the despotic politicking or internecine Board machinations aside, the main Sales takeaways are presentation related.

1984 sees his eye for visual impact. He swaps shirts so he can pull a 3½’’ floppy (ask someone with grey hair) from his breast pocket. The audience sure to gasp as this is way smaller than the norm disk for the day.

Next he moans because when he wants total blackness in the hall to precede and maximise his big unveil, the safety EXIT signs remain on. Something finally rectified (for seven illicit seconds) by 98.

Then there’s why he’s there;

“We’re changing the world in here!”

What are you doing in your presentation room?

Timekeeping is also key to him. One potential script mis-step is when he blasts that as “a computer company” attendees must get a punctual launch; “we’re not ever starting late”. Yet, in the same way he lambasts Pepsi head John Scully when trying to recruit him as CEO for peddling mere “carbonated sugar water”, surely Jobs would not have considered he ran a mere computer firm?

As another chaotic countdown to reveal races along, another line for the hardened Sales launcher;

At least Jobs does one other essential well. We see him rehearse. I hardly ever see salespeople do enough of this.

Whether having plain sheets arranged neatly on the floor, or fancy coloured slides atop a lightbox, he practises. I’d argue to still be reciting lines at such late stage is not quite best practice but at least he does some prep. Many a practitioner would suggest a quick flashcard aide memoire at the final moment beforehand is fine.

There’s a whole meme out there on stevenotes which, it has to be said will tell you more about presenting than this movie. (Although acknowledging that wasn’t the point of their production…) 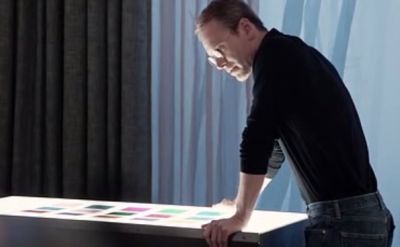