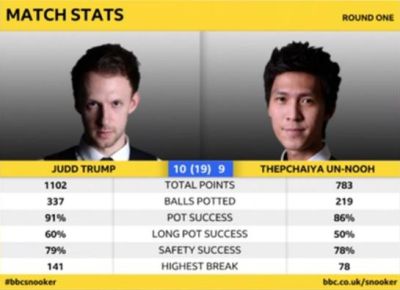 The snooker World Championships already half-way through Round One, as gripping as ever.

The World Number One (and best-of-all-time) looking shattered, knocked-out by the first ever amateur qualifier. And final frame thrillers aplenty.

The coverage provided by the BBC is lamentably as bland as ever.

This season, they adopt the match stats graphic as you can see up top.

There’s nothing superficially wrong about their choice. Yet specifically in this instance shown, it’s hard to envisage that the victor should, in fact, have been the loser, but for one relatively simple ‘miss’.

And that’s the issue with these. They use only entry-level categories. The obvious. Consequently, they reveal little of value. Deeper insight frustratingly within simple grasp.

Football has been slow to pick up on such progress. But is so with the explosion of independent analysts, such as OptaJoe.

Crosses, touches in opponent’s penalty area, dominant tackles, key passes, attempts on goal from both outside and inside the box. None of these get picked up by the standard public broadcast summaries. Instead, you solely get fed the tired old shots (on and off target), cards, fouls, offsides, possession share, passes made and goals.

Where’s the number of times they run out of position? Missed a sitter? Failed to develop reds and so prematurely end a break? Leave a snooker? Play risky shots?

There’s so much a better way.

I am reminded of the recent sporting revolution of sabermetrics. Popularised by Hollywood through baseball’s (yes, I know it’s a poor imitation of cricket…) Moneyball movie.

I recall further blogging on altmetrics. They have their own website. Although wikipedia typically tries to over-complicate (“altmetrics are non-traditional bibliometrics”) how these are, in essence, a contemporary method for tracking scientific research reaction.

It’s a shame in a sense that the prefix alt- is now applied solely to this domain.

Sales needs our flavour of altmetrics.

We all know the usual data tracked. Performance against quota being head and shoulders the prime number when it comes to internal measure.

But what about focused on the prospect?

Where are our gauges for juiciness of said potential customers?

Against what do we judge them to be hot or cold?

Many of these could relate to process parameters too.

Maybe if we’re sticking with Latin stems, meliometric. Whatever you call them though, it’s certainly time for new prospect metrics.