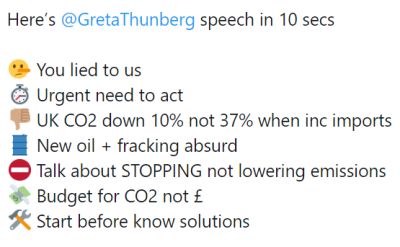 Why oh why is this debate allowed to be hijacked?

Is it because the overwhelming majority of the rest of us non-loons, whilst sharing passion for this issue, get on with doing something about in our own (how ever small) ways, without antagonising any supposed culprits by wrongly shouting that they’re liars, wholly misguided talk of “mind-blowing historical carbon debt” through ‘inventing coal’ and generally bringing life around us down?

A Swedish teen started schoolchildren lesson walkouts over her perceived slowness of action to reverse man-made climate change. She this week even garnered a Westminster meeting with whom MSM no doubt rush to label fellow quasi-Marxists. So successful, such “strikes” have spread worldwide. Although pointedly, not in China. As many of their kind’s bogeyman, Boris Johnson, wrote at the weekend, their real ire should be aimed elsewhere.

You do not change anybody’s mind – nor critically, their actions – by calling them names. Telling them they’re idiots. Comparing them to Nazis (someone must’ve done so, right Mr Lammy?).

Nor do you do so by applying the kind of stats filter deployed by the likes of Diane Abbott or Jess Phillips. Or for non-English readers, anyone that just makes up figures that suit their cause which when recited, generate mass headlines in their favour. When exposed as entirely baseless afterwards, it is too late. The news cycle has moved on. People only remember their ‘fake news’, now “literally, fact”.

And nor, it saddens me to say, can you win through by solely wallowing in the mire of the problem. There comes a point when you truly must propose ‘solutions’. Ones which are credible, plausible and doable.

Nor, incidentally, did post-Gen Z-ers like Greta discover this crucial issue and associated Limits To Growth. And neither were they the first to demand action.

Still, as I – apparently in common with the majority of my compatriots (*) – applaud today’s headline making movement but not their methods, I find the above pictured tweeted summary of a fellow sympathiser worthy of note.

I’ve seen similar before. On other issues, the use of the ten-second summary with emoji bullets abounds.

There are seven bullets here. Normally way too many for a modern-day slide.

You don’t need to stretch to the same number to highlight your prospect’s “emergency”. But even four or five in this format may well make an extremely useful slide. Or even an added image to a Prop’s Exec Summary. One which changes-up the traditional corporate template and jolts their brains into keeping your unique message stored away, ready for later action as you recommend.

* note too how this data is presented, here by Skynews; 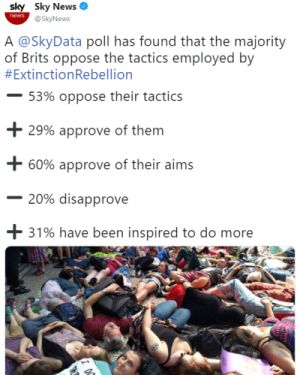