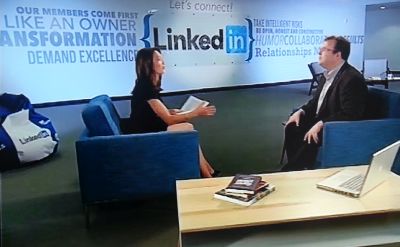 A screenshot from Bloomberg tv’s Studio 1.0.

Proof that the most lame sounding pitch can turn an (eventual) profit.

“Friendster for business” LinkedIn founder Reid Hoffman doesn’t seem to like that tag, nor “the startup whisperer”.

I was struck by how his stated desire to invest in products that “transform the world” was at odds with his inability to succinctly describe them with any punch. Still. He’s the billionaire and I am not, hey.

Behind him is a large wall adorned with corporate cultural babble.

Under the strapline “Let’s connect” here’s what the LinkedIn disciples must espouse;

As a list is there much wildly wrong with this?

You can for instance argue “think like an owner” is patronising and misplaced. Yet there is an attempt at summing up what makes them tick in a positive light.

In fact, my disdainful prose may give rise to the idea I utterly dismiss such edicts.

When they emerge from genuine employee curation rather than being imposed from on-high they can be powerful.

Sadly such a state isn’t as commonplace as you’d like.

What’s more important to me is that too many a Proposal or slidedeck we deliver broadcasts our values in this style.

Yes, they can make a pretty slide or page. Especially as they’re usually the result of expensive swanky design.

But what is key is not really your values.

It’s those of your prospect.

When did you last stop to note the stated traits ideally exhibited inside any potential client?

Of course, your hoped-for buyers may hold officially denoted words in contempt.

So what about the kinds of values that any solution must posses from their own, personalised, perspectives?

Now they’d be words and phrases worth putting on any slide.

And priceless when it comes to showing how you uniquely fit such needs.