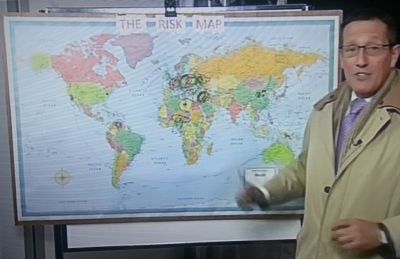 Yet every year I rail at the procession of supposed global movers and shakers that talk the same old utter rubbish.

(Note my blog touching on this a couple of years back too.)

For instance, one such muppet at this year’s World Economic Forum was Rolls-Royce CEO, Torsten Mueller-Oetvoes.

When asked to share his key message for the assembled super-throng, he proudly delivered this “wisdom”;

This trip – as my screenshot up top shows – he’s bought a five dollar map of the world.

He’s plastered “The Risk Map” as its title in red font.

Each interviewee is given a black whiteboard pen and forced to mark where on the planet provides the greatest risk this next twelve months.

Whilst I did like the ensuing pantomime – and there’s a terrific lesson in audience engagement there – there’s a couple of riles this gives me.

First – as you’d probably expect – too many mention stability.

As if it is the holy grail of life.

I absolutely fundamentally disagree with this and wish someone in “authority” would set the record straight.

I never advocate full blown chaos (although let’s park the philosophical thought that the natural order of things drawn to its logical conclusion is anarchy and the obvious paradox caused by vacuum versus freedom) but to idolise stability and produce policies to encourage it as the perma-state all these people preach is just plain wrong.

In fact, just when you are lulled into feeling “stable” is when trouble strikes worst.

Second, there are the scrawlings themselves. 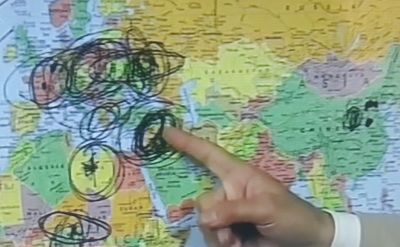 But how are they marked?

Have any of these people ever presented?

You making a point, you own that map.

I was astounded that throughout the week, it was only when we got to see two of the last three luminaries pick up the pen did we see any imagination. 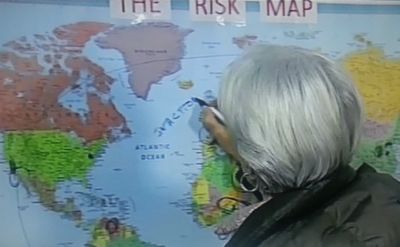 Congrats also to advertising giant WPP founder Martin Sorrell (although he of course may have been influenced by Madame Lagarde’s earlier stamp).

Whilst his on-screen chum the OECD head was busy trying to avoid and reframe the question, Sir Martin headed straight for the mid-Atlantic. “Focus on cost wrong” he daubed. (He should though have used symbols, like $ and = to aid his clumsy English. . . astonishing for a man that employs so many copywriters among his 180,000 staff). 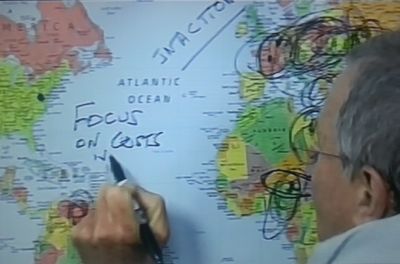 Credit Richard Quest who rightly and in good humour exposed this as being driven by self-interest, given the elaboration highlighted the necessity for firms to “invest in their brands”. Thus enriching the ad game’s coffers. (His other point being the excellent “remove short-termism to focus on long-term investment”).

I was also bewildered at the choice of pen. One of the earliest tricks I leaned was to carry around a super-thick nib marker. Such would have really helped here.

Using the power of the pen, here’s what I’d do. If for example, I decided China was the world’s biggest 2015 risk. Huge arrows pointing Beijing-wards, and even an array of stars to evoke their commie flag symbolism across the Pacific.

I think you can work out how to build on this.