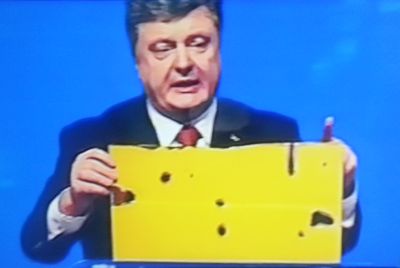 I took this above pic of my telly. It’s the Ukraine President at the Davos World Economic Forum.

He holds a piece of bus coachwork wreckage to prove Russian involvement in a recent Donetsk massacre.

(I also note how the colours happen to coincide with the country’s flag.)

At the outset of my career I used to sell to defined verticals. One was the toy trade. I took to carrying a box around in the boot of my car filled with notable toys from customers. I’d take them into formal pitches and let the audience play with them.

A few years later, another line of business focus. One was car part distributors. I got my guys to keep various widgets with them that could physically show key link sell gaps.

Both worked extremely well. We certainly stood out.

(Gimmicks though, do not.)

Even better if it is something tangible directly related to the prospect and the issue you seek to resolve. 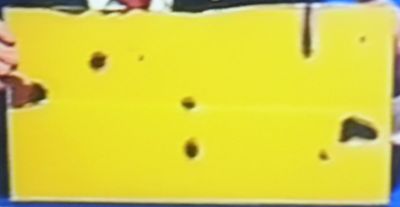