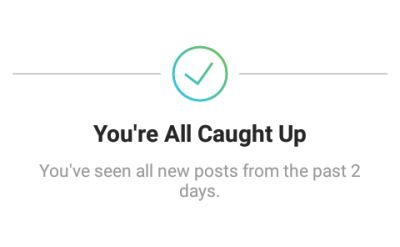 I certainly noticed this when I saw it for the first time. I scrolled through my Instagram ‘home’ feed for quite the while as I sought to find an activity that staved off my fingernails being bitten during the World Cup.

At some point, rather than being interrupted by the now far too frequent and seemingly wildly untargeted ads, this notice appeared; You’re All Caught Up.

If only there was a way that I’d be informed whether all my prospects had seen, discussed or moved on my latest action.

They’ve All Caught Up

Your prospects have reviewed all info, questions, proposals from the last meeting

In part this bashed my salesy bone because of all the disastrous follow-up calls that hit the wall.

These have many labels. As well as follow-up, you may recognise ‘checking in’ or ‘any news yet‘. The scenarios can be similar. You’re waiting on a decision.

This may mean the big ‘go’. More often, it finds the seller hoping that their previous email has been opened, the lovingly crafted pdf has been read, or that ‘chance to talk’ with their colleague has taken place.

What are the odds your prospect has acted?

This suggests that every other call will be potentially awkward.

What busy business person wants to admit they’ve not read or considered your previous prose (despite the inordinate length of time you’ve no doubt given them to do so)? Many reasons beside apply. They’re not the big wheel. Their colleagues are slow. They don’t like saying ‘no’…

One ‘classic’ approach is to try never to leave yourself with a singular call purpose.

The momentum drain from stalled prospect motion avoided by ensuring you run many a conversation in parallel. Whilst the ‘major’ item is slowly going through, there’s a series of more ‘minor’ ones to go through concurrently.

Secondary objectives are not always simple to set in train though.

After pleasantries, I’ve never much minded asking what a prospect’s thoughts were on the ‘pending’ something or other. How close it may have been to an answer. Or which bits might need more light shone on. A qualifier opportunity rolls along.

If your relationship is healthy, they’ll be fine on such a call. But if I were to suggest one trusted fallback should you sense any cooling off, then it’d be about discussing priority.

Is the project still one? How might it have shifted? Does it rank that way for everyone?