Oscar nominated The Wolf Of Wall Street. Not only is it at least 45 minutes too long (which could easily be cut from the movie with sensible editing) but it is also shamefully light on the “cautionary” and “redemption” angles ludicrously claimed by its star and maker.

If I can get over my annoyance at yet another slice of mainstream media making it so hard for us legitimate Sales strivers, it does have moments of enjoyable rompiness. Like an updated Carry On of a movie. Kenneth Williams and Sid James for Leonardo DiCaprio and Jonah Hill. If only…

It’s the tale of a crooked stockbroker. Much has been made of the profanity and debauchery. It says perhaps a little too much about my sales youth that the language never raised my eyebrow, and the so called sexcapades felt a mere caricature.

From a sales point of view, the first of three insights I’ll look at here concerns the simplest observation.

In (at least) the third (and swankiest) office we see Leo bestride, he has this huge whiteboard.

In its main appearance it provides the backdrop to team narcotic intake.

The set dressers gave this a decent stab.

How neat is that handwriting?!

Each salesperson is dehumanised by surname-only notation.

Then there are three columns. Although their headings are not fully legible, it feels they may be tallies by different periods. As the numbers ascend from left to right. So perhaps something like a daily, weekly or monthly aggregate? Or maybe a specific product in column one, then weekly/monthly totals?

In any case, the details aren’t quite as important as the general message.

This visual has maximum prominence. It is right behind the boss’s seat. It is enormous. Anyone looking or being in the office will be consumed by it.

Yet those hardworking set designers have missed a few tricks.

Their board is too tidy. And too monochrome.

On real sales floors, there would be a blemish a plenty on the board. Shirt sleeves would have rubbed away the lines (hence why thin whiteboard tape exists) and scuffed several letters and digits.

Names would highly unlikely be all by the same hand. There would be crossing outs. Circles around numbers and different colours to highlight, even the odd red underlining.

There wouldn’t be only numbers either. Roman numerals, or sticks and gates of fives, even A*s and five-pointed stars so beloved of infant school teachers. Stellar performers would have playful sun-glow effects around them. Smileys and frownies would abound.

Especially in such an atmosphere as this place. I wince to imagine post-it notes with all sorts of insults and depravity stuck up there too.

Even compared to my recent blog on a Welsh call centre’s scoreboards, you can see how the whiteboard in the movie is, whilst lovingly presented, plainly inaccurate. Out of place. Nowhere near the true vibe. Not an ounce of the personality (whether toxic or raucous) on display which would have undoubtedly featured back in that day.

I’ve always considered scoreboards a winner. So long as they are authentic… 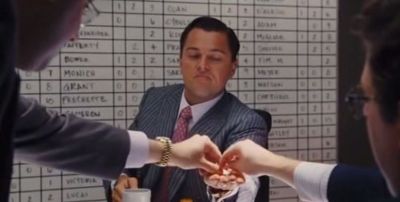 My other pair of posts on this movie concern their initial cold call script and selling a pen.