That was one potential title for this blog. It’s from the Leonardo DiCaprio starring, Martin Scorsese directed, movie, The Wolf Of Wall Street. It follows a whitecollar criminal, imprisoned for his stockbroking illegalities. And this phrase appears his preferred closing line.

When the chief protagonist later founds his own firm, we see him deliver his induction training. 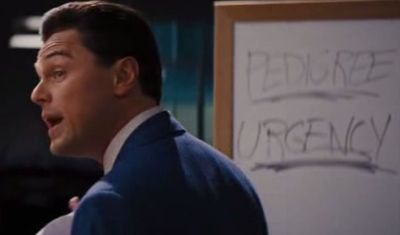 The subsequent three minutes are machine gun fire filming. Even if a disturbing reminder of how old school tactics should be banished from life. To paraphrase, he begins brandishing a piece of paper,

‘…the people you’re calling are your Moby Dick, and this script is your harpoon’

I could have also called this post ‘Pump And Dump Harpoon Script’. Here is that now refined cold call script (with its inventor’s comments in square brackets, sans expletives);

Wolf: Now the key to making money in a situation like this, is to position yourself now before the settlement. Because by the time you hear about it in the Wall St journal it’s already too late.

[and you wait, you wait, and whoever speaks first loses]

Prey: Sorry erh, I, appreciate the call. I really have to give this some thought and talk to my wife about it, erm, can I call you back

Wolf: [they don’t know, they got to think about it, talk to their wives, the tooth fairy, it doesn’t matter. The point is it doesn’t matter what they say. The only real objection they have is they don’t trust you guys. And why should they trust you? I mean look at you, you’re a bunch of sleazy salesman right?! So what do you say?]

You mean to tell me that if I put you in at … [examples follow:]

Texas Instruments at 11 and took you out at 47

You wouldn’t be saying to me right now, [my name], pick me up a few thousand shares of Disney on the spot, right now, come on.

Prey: I, I don’t know you, you cold call me, you’re a total stranger

Wolf: I am in complete agreement with you. You don’t know me. I don’t know you

Let me introduce myself to you. My name is [my name] I’m senior vice president at Stratton Oakmont. And I plan on being one of the top brokers on my firm next year. And I’m not going get there by being wrong, [firstname].

Prey: I didn’t want to say that, you sound like a pretty sincere guy

Then you’ll know for sure, you’ve finally found a broker on Wall St that you can trust and who can consistently make you money. Sound fair enough?

Prey: No, yeah, I got to say I’m pretty impressed, what are you thinking…?

Wolf: [firstname], you give me one shot here. On a blue chip stock like Kodak and believe me, [firstname], the only problem you’re going to have is that you didn’t buy more. Sound Fair enough?

[nervous laughter] Come on, my wife might divorce me but yeah, let’s do it, yeah.

Wolf: Excellent choice, [firstname], how much you want to go for this time?

Prey: Alright let’s do ten. You want to do that

Prey: Want to do that…

Wolf: Excellent choice. Let me lock you into that trade right now and get back to you in a few minutes with exact confirmation, [firstname], and welcome to Stratton Oakmont.

Prey: Thanks man. I’m going to have a beer, right?! That was fun.

Prey: Hey thanks, thanks a lot

The delivery is spellbinding. The written word completely fails to give justice to the incredible actions and body language throughout.

The web is flooded with articles on the real-life firm in question’s crimes.

Suffice to say, the three elements all such scams exhibit appear to be;

the lure of lofty returns, a claim of inside connections and a pressurized pitch to open an account on the spot.

How fantastical do your claims sound? On who are they reliant? Is the timeline fixed on you or your client?

You can do better than this, right…

As Crony Number One pitches, “it’s like getting in on sunlight before there was sunlight”. 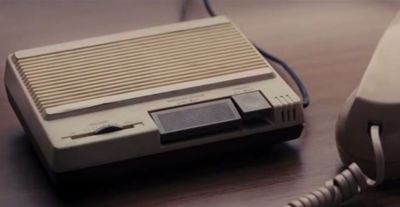 My other pair of posts on this movie are on selling a pen and scoreboards.