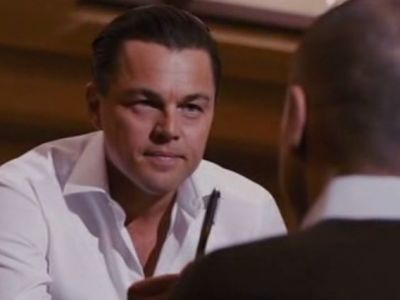 The first of a trio of posts triggered by this film, up for gongs at this weekend’s Oscars.

It features a pair of scenes where DiCaprio’s character demands, “sell me this pen”.

The end sequence finds a trio of hapless Kiwis put on the spot at his modern-day training roadshow, and mumble rubbish;

It’s a nice pen. You can use the pen to write down thoughts from your lives so you can remem…

Well, this pen works and I personally love this pen…

We, the audience, know this to be all wrong. That’s thanks to what we see a good couple of hours earlier. There’s an exchange with the drug dealer pal of Leo’s who “can sell anything”. Leo hands him the pen, urging him to sell it to him;

Why don’t you do me a favour, write your name down on that napkin for me.

Exactly, supply and demand my friend.

The diner’s table of friends have their eyes opened wide.

A touch canned for sure, but a worthy point nevertheless.

Even though we’re unlikely to sell something so immediate and one-to-one, the principle can still apply.

I’m reminded of my Nineties software days. Data warehousing, business intelligence, whatever oxymoronic phrase you choose. I used to revel in asking the chief exec to show me answers to fairly mundane, yet killer, figures on margins, products, clients and the like.

They’d make phone calls, which’d go unanswered, ask their PA for a report which when it arrived an aeon later would resemble an elephant’s toilet roll, and even try to wing it with a made up reply on the spot.

How they bit my hand off when they realised they could gain the key info in a couple of simple clicks.

The other pair of posts on this movie are on the initial cold call script and scoreboards.