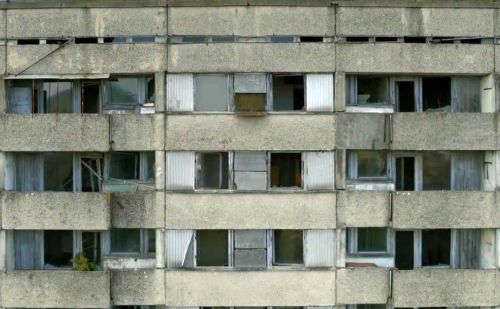 The above is the first imagery appearing in documentary, David Attenborough; A Life On Our Planet.

Well, almost. I’ve had to brighten it considerably from the actual frame. Filming the devastating drabness from the uninhabitable Chernobyl of the day. Which sadly brings perhaps the only misstep of the whole eighty minutes.

The peerless broadcaster strangely falls way short of his normal standards when describing the pre-nuclear calamity of 26 April 1986 locale of 50,000 residents. “It had everything a community would need for a comfortable life”.

This nearly derails the entire enterprise. But as it’s Attenborough, you elect to give him another chance.

These early sweeps are full of panning shots of decrepit buildings, rooms and places once thronged with townsfolk.

This first subject shot almost in the wonderful way of Andreas Gursky from the ‘School of Dusseldorf’ style. Albeit a little too zoomed in here.

This is definitely a great way to take a snap of a prospect issue if you ever get the chance.

Beware though, as I have come into contact with jobsworth security guards when taking a pic of the exterior of a client building.

A snap from inside a prospect’s office can also be tricky. Secrecy concerns abound. Yet, with permission, you can angle for an unobtrusive snap of one of their meeting rooms. Even better if your closest support there takes it for you. In the fashion you set out. A bit like this abandoned Soviet classroom from the back. 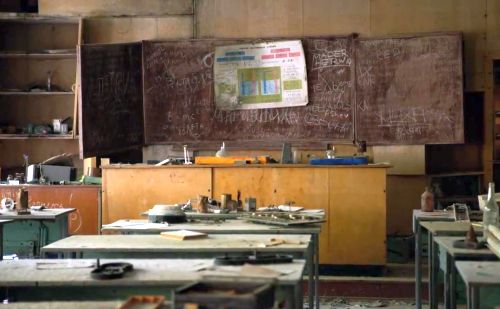 When it comes to highlighting the destruction humanity has recently wreaked on the planet, the same slide design appears throughout, about a half-dozen times. Starting 1937. With population a mere 2.3 billion, carbon in atmosphere 280 parts per million and remaining wilderness at 66%. Each revision updated every decade or so until these shocking stats as at 2020. 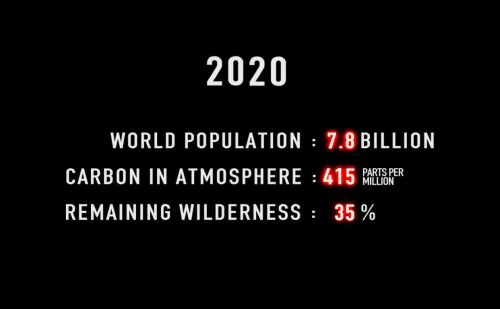 The reddened glow of alarm added for the latter slides figures. Quite the change.

Two sets of animation are used to ram such decline home.

Using the high-impact technique of the before and after picture.

The Arctic, with its loss of Summer sea ice amounting to 40pc over 40 years.

And Borneo. Staggering that on this S E Asia island, “more than half of the species on land live”.

“In the 1950s, Borneo was three-quarters covered with rainforest … By the end of the century, Borneo’s rainforest had been reduced by half.”

Here’s their classic then vs now treatment, cropped and colours remixed for even greater starkness. 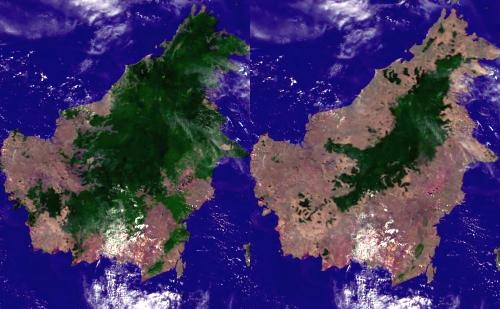 But we are infused with hope.

Attenborough’s compelling witness statement ends with a tear in your eye.

Yet he goes on to provide the light of solution.

With astute initiatives, Costa Rica proves we can bounce back.

Rampant logging reduced a country three-quarters covered in rainforest to just a quarter.

Twenty-five years of effort saw forestation return back to half.

And there’s those Japanese life-choices, and Dutch farmers, and Moroccan solar panels, and more besides.