Then there's the harshest of police state jackboot should you be openly, you know, non-heterosexual, a democrat, or even a woman.

And how can anyone truly trust any country which outlaws the simple pleasure of having a drink?

Yes, the biggest single sporting jamboree on the planet was awarded by what all accounts - even belatedly the crook overseeing it at the time - term a mistake. And according to various investigative journalism, was plainly corrupt.

And lo, the tiny nation sees it as a chance to encourage tourism.

Their physical supergraphic installations follow the themes of their unavoidable ad campaign.

Like the one below. With hi-vised worker dutifully cleaning. Lucky for him not one of the six and half thousand. Best he don't miss a bit.

Yet there may be a chance to reclaim the event in our own small way.

Each single, key word on their ads is split. An elongated gap between first syllable and second. Not quite an underscore.

As seen up-top by way of slide text illustration. Here I use the tournament brand colours and font. For the solution-y word; quest___ion.

Remix away for your big day, 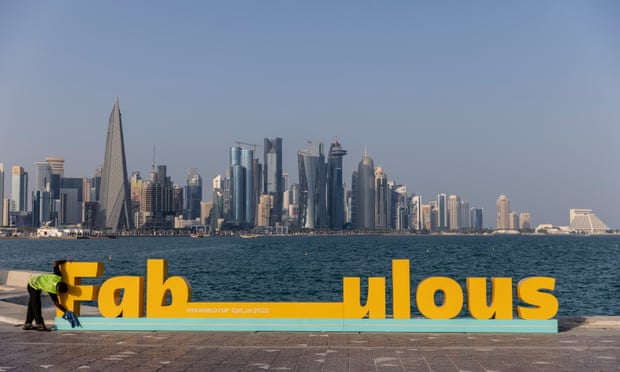