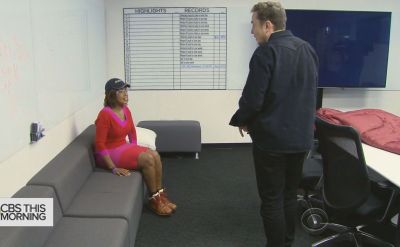 And not only because he’s discovered corporate life ought be geared better towards escaping the scourge of bad meetings.

This week – my head spins in bewilderment as I type – because the billionaire seems the recipient of a crowdfunded gift of $5,000.

Halfway through, we wander into a surprisingly nondescript meeting room. The whiteboards seemingly shorn (on purpose?) of any legible scrawlings. A narrow grey couch featured a sole small white pillow. And a burgundy sleeping bag lay on the conference table.

When he pulls an all-nighter (which we learn is often at present as he tries to navigate his manufacturing ‘path back from hell’ after falling months behind on promised output targets) he bunks down here. Sadly preferring the floor as the couch is unsuitably small.

The internet, bless, consider this man – worth at the time just the 20 billion dollars – would appreciate a little help.

But back to the time machine that was the reusable rocket man’s bland 90s styled office.

The scoreboard has two columns; Highlights & Records. Space for 21 rows.

Perhaps (apart from number of “vehicles built in one day” and a fifteenth added to the initial list of 14) there’s a good reason it’s empty. Is it meaningless, irrelevant, redundant?

Which begs the question, what about the scoreboards on your sales office walls?

The contrast between the fairly characterless room and the wall between it and the adjacent plant is stark.

Here is where we learn that in the past week, they produced 2,071 cars. 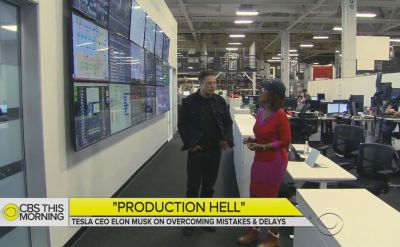 As they scanned a block of fifteen separate data screens.

Strangely, I’ve seen control hubs and call centres with more plasma inches. Also of intrigue is how few eyeballs this array of info can reach. There’s hardly anyone that can sit in these surrounds. Four spare chairs and three computer screen berths seem the extent of the audience.

Which brings back my earlier point. Adornment policies of salesrooms’ wall real estate is a topic I have been known to bang on about… (most recently just a few days ago when riffing on a New York war room).

Data and dashboards, figures and charts. Essential display in pretty much any salesroom. But what numbers and graphs? Therein lies the magic.

I always recommend stats that underpin your process and promote improvement of it.

And anything that instructively moves away from the standard wizard-style bar- or pie-charting is to be welcomed.

Then you too could be geared up like Elon Musk to be ‘overcoming mistakes and delays’.